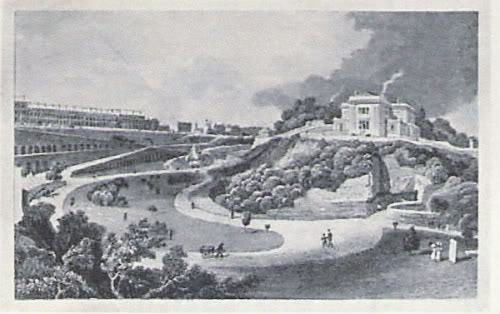 St Jame's cemetery, drawing by T. M. Baynes
St Jame's cemetery, was consecrated in 1829, the view above is as it was at that date, showing Gambier Terrace and a portion of Hope St, and the catacombs hewn in the sides of the road descending the cemetery. The ancient red sand stone quarry which was here was responsible for the accumulation of mounds of unsightly rubbish, in 1767 the Corporation decided to relieve the distress of the unemployed to remove the rubbish and transform the district into a pleasure-ground, having a public walk, or esplanade on its western side, to Hale Hall and other places and which was first called Quarry Hill, then Mount Sion, then Mount, simply, then St James. The mount had a pleasing view over the Mersey and the Wirral, the Welsh Hills forming a magnificent background

Photographs of some tombstones

Funeral of a soldier

On Tuesday the remains of George BURRELL a soldier belonging to the Royal Artillery were interred at St James cemetery. The deceased was attacked with virulent smallpox on board the screw steamer VINCENT when about to proceed to the Crimea, and had to be sent to the Workhouse Infirmary, where he was admitted on the 19th January, he died on the 2nd inst. The funeral was attended by a large number of people and the deceased was interred with the usual military honours. 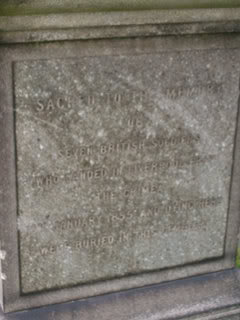 The wounded soldiers in the workhouse

Three of the soldiers lately returned from the Crimea, have expired they will be interred at St James Cemetery with full Military Honours

Names of the deceased - GOODALL, SPINKS and EVANS, the two former died of wounds sustained at Crimea, the latter of diarrhoea.

The firing party consisted of a detachment of the Royal Lancashire Artillery and the staff establishment under the command of Capt FRYER. There was a large attendance to witness the last of the noble fellows.

A sister of GOODALL'S came from the South of England to witness the ceremony. The Rev J. HOLME performed the funeral rites.

Monument to the memory of Crimean soldiers

It will be recollected that in the early part of last year a body of invalided soldiers who had served in the Crimean campaign were landed at this port. They were placed in the workhouse and supplied with everything of which they stood in need. Many of our townsmen visited them and public sympathy was largely excited in their behalf. Many of the brave fellows were severely wounded, in several instances the injuries terminated fatally. The names of those who died here were John HEWSTON, 20th foot, Samuel SPINKS, 38th foot, Lawrence CARNEY, 47th foot, Thomas MARSDEN, 47th foot, John GOODALL, 63rd foot, John START, 93rd foot, and William EVANS, 1st bat of rifles. As a tribute of respect to their memory a large number of persons attended their funerals. They were buried at St Jame's cemetery with full military honours. Shortly afterwards a subscription was entered into for the purpose of raising a monument to their memory. A few days ago the monument was raised at St Jame's cemetery, it stands on a eminence at the north end, from its position it cannot fail to strike the attention of visitors on entering the cemetery. The monument consists of an obelisk or shaft of polished granite. Its design is characterised by simplicity in keeping with the mournful events it is intended to commemorate. The four sides of the pedestal are of black marble, the one nearest the spectator inscribed:-

"Erected by public subscription, to record the courage and endurance displayed by the privates of the British army, who at the call of duty devoted their lives to maintain the honour of their country and the fidelity of England to their allies, - Anno Domini 1856"

On the other side of the pedestal is the inscription :-

Sacred to the memory of seven British soldiers, who landed in Liverpool from the Crimea, 15th January1855, and dying here were buried in this cemetery

On the third side are recorded the names of the deceased, as above stated the remaining side left blank. The artist is Mr A. MACDONALD, sculptor off Aberdeen.

The members of the 12th and 17th, L.A.V, mustered at their headquarters about 8am, under the command of Capt John MC CABE, and marched to the deceased late residence in Harrington St, Toxteth Park.

The Officers present were, Lieut's ATKINSON and CLARK, Sgt Major BARRIS of the 12th L.A.V, and Sgt MC ILROY of the 17th L.A.V.

The body was conveyed on a gun-carriage, drawn by 4 beautiful horses and the coffin covered with the Union Jack of the regiment to which the deceased belonged.

The band played the, Dead march in Saul.

The burial service was read by Rev William BANNISTER, in the chapel in the cemetery, and the coffin bourne to the grave by 4 buglers, 3 vollies were fired over the grave.

The deceased was only 21yrs of age and was much loved by his comrades in arms, who, gave proof of their affection by the large numbers attending his funeral. 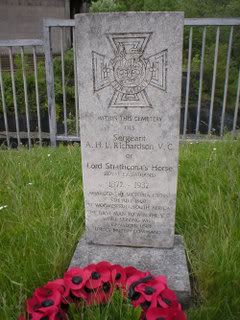 Death of Capt HALSEY of the THOMAS BENNETT, funeral at St James cemetery 1844

Funeral of Edward LANGSDALE Esq, at St Jame's cemetery 1857
Inquiry into the burials at St James cemetery and the Necropolis 1857