A personal narrative of the tragic event

On September 15th, 1830 the Liverpool and Manchester railway was declared open by the Duke of Wellington. The double track ran from Liverpool, through Parkside and Eccles, now a Manchester suburb. 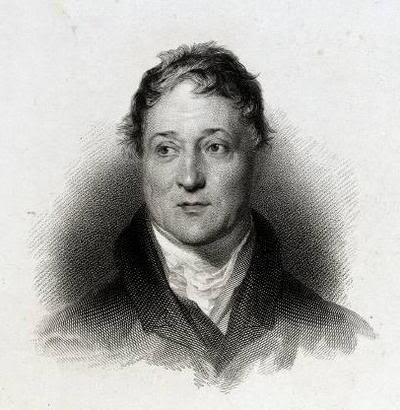 On the north track seven locomotives dragged three, four or five carriages each, on the journey from Liverpool; whilst the south track was reserved for one engine and three carriages, one for the Duke and his suite, one for the directors of the railway, and the third for the band.

At Parkside the Duke of Wellington's train stopped to take water, and, in spite of printed warnings to the contrary, Mr William HUSKISSON, member of Parliament for Liverpool, a former Treasurer of the Navy, President of the Board of Trade, and Cabinet Minister, descended from one of the trains on the north track, which had stopped, and came to speak to the duke. While he was either on one of the tracks or between them the engines on the north track began to move, as their watering-place was a little distance east of Parkside.

HUSKISSON endeavoured to enter one of the carriages on the south track, but the swinging open of the door threw him either against or under one of the passing engines.

He was placed in the Duke of Wellington's train, some carriages being detached, and conveyed to Eccles, the train then proceeding to Manchester to bring surgical help. Every effort was made to save the injured man's life, but his injuries were too severe and he died.

The above is a brief statement of the facts.

The fullest particulars of the tragic event were published in the December, "Cornhill Magazine." The original report of Dr J. P. BRANDRETH, on the accident. This medical man was one of the passengers on one of the trains placed at the service of the general public, and he was summoned to the side of HUSKISSON immediately after the catastrophe.

His "Personal narrative" is embodied in a letter written to Mrs GASKELL, of, Thornes House, Wakefield.

I was on the last seat of the first train, fellowed by six other steam engines, containing near 300 persons. The Duke of Wellington's carriage was on the other line " i.e., the south " and several times passed us at great speed, and then, stopping, allowed us to pass him.

On our arrival at Parkside, 17 miles from Liverpool, which had been accomplished in 55 minutes, the duke's carriage, with about 70 persons, was taking water, and we passed on to our watering-place, about half a mile in advance, and, perceiving that the other trains were considerably behind us, I got on top of the cutting to look back for them. I saw two trains arrive, and stop at their purpose place, but observing that the fourth remained opposite the duke's carriage, a quarter of a mile short of where it ought to have been, I was fearful some accident had happened, and immediately walked down towards it.

I was soon met by Mr FORSYTH, almost exhausted by running, who was coming for me, in consequence of Mr HUSKISSON having been run over. I hurried and found Mr HUSKISSON on a door lying on the railway, Lord WILTON having twisted a handkerchief round the thigh.

Lord WILTON desired me to arrange what had to be done.

My first impression was to return to Wavertree Hall, but the carriages and engines were all wrong for that purpose; there was no alternative but to go to Manchester, as there was no accommodation on the spot or any house near.

With the assistance of Lord WILTON, Dr SOUTHEY, of London, and Dr HUNTER, Surgeon of Edinburgh Hospital, we placed him in the car occupied by the band and set off to Manchester.

In a few minutes he became so faint that I stopped the engine to inquire if any bleeding had taken place; and determined them to remain at the first house we came to, conceiving his speedy dissolution to be inevitable. After we set off again he rallied, and it occurred to me that we might stop at Mr BLACKBURNE'S at Eccles, as from the crowds we should have been subject to much inconvenience at Manchester.

When I mentioned this arrangement to him he appeared much pleased and said, "Pray do so; I am sure my friend Mr BLACKBURNE will be kind to me." Upon the whole we bore the journey well.

We contrived a kind of fence with baize, to keep the wind from him, which blew violently in consequence of the speed we were going, ten miles, including the stoppages, in 17 minutes.

My medical colleagues were so uneasy at it, that I thought they would loose their self possession!

We arrived under the bridge at Eccles in a violent thunder and hail storm. It was under a very deep cutting, and I despaired at getting Mr H up, but observing a barricade on one side, I concluded there must be some kind of a road behind. With considerable difficulty we broke down three tiers of defences, and got him safely to the top, which was only a few hundred yards from the vicarage.

I sent Lord WILTON, Mr H. SERLE and Mr STEPHENSON on to Manchester with the engine, to fetch surgical aid. They were absent nearly one and a half hours.

During this time Mr H was occasionally faint, but without material suffering.

I gave him a little wine and brandy, and was not without some hope that his strength might rally, so as to enable us to amputate the limb.

Upon the arrival of the surgeons we were unanimously agreed he had not the strength to bear the operation. He had some laudanum and ether administered, and I then went down to the bridge to inform the duke and directors of the state he was in.

They had been detained two hours at Parkside the reason I will give by and by.

I told the duke Mr H had borne the journey better than I had expected but that he was deplorably ill, though I trusted not entirely hopeless.

The duke went on to Manchester, I have forgotten to mention that previous to the arrival of Messers RANSOME and WHITTONS from Manchester Dr HUNTER and I cut the boot and clothes off the wounded leg and placed him in the drawing-room upon a low half sofa, and had everything prepared for an operation if it should be considered desirable.

The leg presented a frightful appearance, but in the wound nothing that would prevent the operation or any reason to doubt its success if he had, had constitutional strength to support the additional shock. It is a perfect mystery how the wound was produced, judging from the representations of those who witnessed the accident, and in those statements there is very little differences. The leg half way between the knee and ankle was almost entirely severed, except a small portion on the outside, but the boot was scarcely marked at all. Half-way but rather higher up between the knee and body, the whole flesh was torn off above the bones broken, but the artery which lies over and above it was not injured; which accounts for the small quantities of blood lost.

The flesh on the outward and lower side was not injured much. It was scarcely possible to understand how this could take place if the wheel had gone over him, or how only one wheel, and that the first of the engines, could have done so, without the whole train following, or why it did not, from the enormous weight, entirely sever it.

Resigned to his fate.

Upon my return to the house I found that Mr H had suffered from a severe spasm, which continued to return at intervals during the short remainder of his life.

He retained his self-possession throughout, and occasionally, between the spasms conversed with those about him.

To myself he said, "You see I shall never live to make any return for your kindness. You have done all that was possible but it is in vain."

"Why endeavour to support my strength ? I must die: It is only prolonging my sufferings."

I did not hear much of what he said to others, but he spoke to everybody.

Between 4 and 5 o' clock I saw some engines go by and concluded the whole party had returned to Liverpool.

About this time Mr H desired to make a codicil to a will, which I understood he had only made the day before. Could he have had any anticipation?

He had said the night before, "What would I give to have the next fifteen hours over."

After he had made the codicil he desired to have the sacrament administered, and as he came to the part in the Lord's prayer; "forgive us our trespasses," he said, "I hope I have no enemies in the world. I have no enmity to any human being."

He never once alluded to the accident.

The spasms gradually became more frequent and violent, and he could not refrain from crying out, praying to be released, and asking how long it would last.

It was a most painful and agonising scene, but it was evident it would not last long.

He died at twenty minutes past nine, I believe, without much interval of relief; but I left him, seeing as I could be of no further use, at a little after seven.

When I got down to the railway I found the whole party, more than 700 still there. The duke and directors had gone off about 3 o' clock, leaving the rest to their fate, and most uncommonly dissatisfied they were.

We did not get home till 10.30, and it was a mercy considering the state we were in, that we ever got home at all.

Poor HUSKISSON'S accident had deranged everything, and I believe all the other mischance's were solely attributed to it, and no blame could attach to anyone, but a lamented failure it certainly was.

Everything went wrong. I mentioned that the party remained at Parkside for one and a half hours after we left them.

The duke and Sir R. PEEL insisted on going back to Liverpool, and the directors had agreed to it, when some of the proprietors, learning what had been proposed threatened to call a general meeting on the spot, and refer it to the proprietors at large, most of them were, of course, present. At last they agreed to go on.

The delay had enabled the people of Manchester to collect a party together who were hostile to the duke, and they had been furnished with tricoloured cockades, by which they were able to recognise each other and to congregate in one place.

Considerable dissatisfaction was shown as they entered, some hissing and some missiles were thrown. The duke could not go into the rooms, but remained in the carriages, around which multitudes had collected. He became uneasy and insisted on returning to Liverpool immediately.

Mr HUSKISSON'S body arrived in Liverpool last night, and we are to have a public funeral on Friday. The interment is to take place in the middle of the cemetery, and we shall have a monument â€“ splendid or otherwise according to the amount of subscriptions we may be enabled to raise. 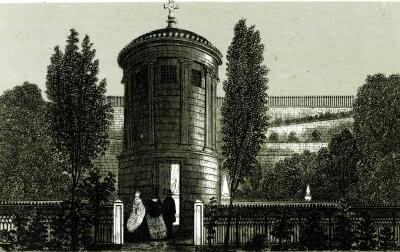 Erected in St Jame's Mount Cemetery, Liverpool, to the memory of the Right Hon, William HUSKISSON, M.P, who was killed at the opening of the Liverpool and Manchester, Railway, September 15th, 1830. The monument is in the form of a small circular temple, enclosing a marble statue of the deceased by John GIBSON. R.A.

General HUSKISSON late of the 67th Foot and brother to the celebrated William HUSKISSON died on the 30th Dec 1854 in Mount St, Grosvenor Square.