Death of Capt HALSEY of the THOMAS BENNETT 1844 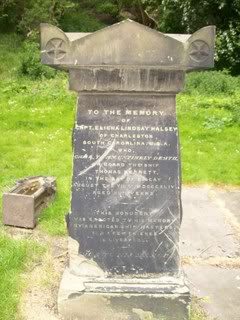 Murder of a Liverpool captain

We regret to announce that a terrible murder was perpetrated in the Bay of Biscay on the 9th instant.

On the 3rd inst the THOMAS BENNETT, HALSEY Master, sailed from Charleston, when she got in the Bay of Biscay a dispute arose between the captain and the cook, in the course of which the captain presented a pistol, and seemed intent on producing death.

The cook immediately produced a knife and stabbed the captain in the back and also in other parts of the body, death was almost instantaneous.

The crew secured the cook and kept the remains of the captain on board and brought the vessel back to Liverpool. She arrived at the Rock Lighthouse this morning and the disastrous news was given to the police, several constables were sent on board the vessel and the cook was taken into custody and conveyed to the bride well.

The Captain’s body will stay on board until it has been examined by the coroner’s jury.

The captain was a respectable married man of gentlemanly deportment. The cook, a young married man of this port, was placed this afternoon before Mr RUSHTON, who remanded him until tomorrow to afford time for a consultation with the coroner Mr CURRY

The evidence having been closed some seamen, crew of the THOMAS BENNETT, expressed the wish to deny, imputations upon their character, by questions having been asked whether they exhibited any symptoms of mutiny or disobedience, there was no foundation whatever for the insinuation.

At the end of the discussion on the subject, Capt BINN of the American ship GEORGINA, expressed a wish to make a representation to the court on the character of the deceased.

It would be implied by the evidence of the steward and others that Capt HALSEY was something approaching an habitual drunkard, or a least a hard drinker, he had known Capt HALSEY for more than 20yrs and he thought it his duty as a friend of the deceased to say publicly, that he had never seen the Captain drunk of bordering on intoxication. In fact, it was with the utmost difficulty that he could be prevailed on to take a single glass of anything. He wished to say this much with regard to the memory of his deceased friend and out of respect to the feeling of his family, who would be deeply wounded by such an imputation.

The Coroner said he had been present at the post mortem, and had never seen a more healthy liver, proof that the deceased habits were not that of a drunkard , Mr WOODS, Surgeon confirmed the opinion of the coroner.

The coroner summing up pointed out to the jury that there were three verdicts, murder, manslaughter and justifiable homicide, and then explained the nature of the circumstances which would bring a case of homicide within these particular classes.

After an absence of 20mins they jury returned a verdict of “Justifiable Homicide.”

Effects of the verdict

The American authorities in this port have claimed to have KENT delivered to them under the treaty, to be tried in the United States, the offence having been committed to an American citizen under the American flag. The Home Secretary has been written to for instructions, the case being one of justifiable homicide, upon the prisoner would in ordinary cases be entitled to his liberty. The question arises will the American authorities persist in their claim.

The remains of Capt HALSEY were interred yesterday afternoon in St James cemetery and as a mark of respect were attended by most of the commanders of the American vessels in port.

The reply of Sir J. GRAHAM was received today, enclosing the opinions of the law officers of the crown.

Shortly after the prisoner KENT was brought up at the police court, Mr RUSHTON asked whether the American Consul had been informed. Mr ELLIS the senior clerk replied in the affirmative.

Mr RUSHTON addressed the prisoner, “When the depositions in your case were taken before me, I told you that I should submit the evidence to high official authorities. I have done so and it is now my duty to discharge you. From the fact of the body of the deceased being brought within the jurisdiction of the coroner of the borough, it became necessary to institute a solemn inquiry into the cause of his death, and since the evidence was taken by me, that inquiry has terminated. The jury were men of great respectability, and it must be consolatory to you to know that the verdict was one of justifiable homicide.”

The prisoner was then discharged and left the court, accompanied by a crowd of spectators.