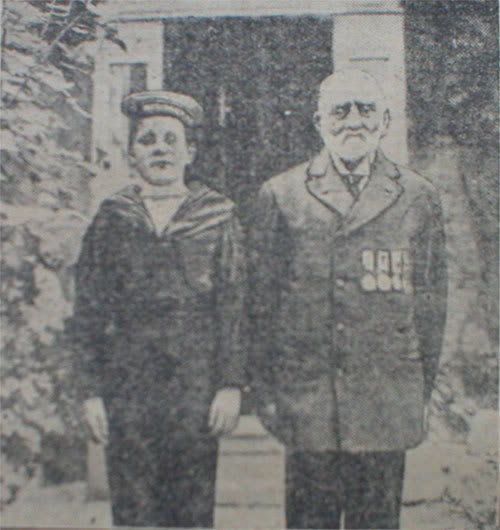 Michael White the young sailor is printed by way of contrast, the present and the past.
MICHAEL WHITE, LIVERPOOL SHIPMATE OF LORD CHARLES BEREFORD

RECOLLECTIONS OF AN OLD SALT

Michael WHITE the old shipmate of Lord Charles BERESFORD on board the frigate SUTLEJ and during the recent visit of the Channel Fleet to Liverpool, was entertained to dinner aboard the flagship KING EDWARD V11, was seen at his very nice home in Rockferry yesterday. He looks hale and hearty despite the fact that on the 26th of this month he will be 85 years old.

He is a most interesting old Jack Tar, with a very resentful memory.

Questioned as to his service and warrior antecedents, Mr WHITE said:-

I was present at the bombardment of Odessa in 1854, when the forts were blown up.

There was a stirring scene at the time, I expect? ;- There was indeed Sir.

And you could recall any other engagements, I dare say? - Yes, I was in the Crimea, and was present at the Siege of Sebastopol , a party of 50 blue jackets were landed to bring off the wounded. Marshal St Arnaud and Lord RAGLAN were then in command of the left and right wings. We crossed a large portion of the battlefields of Alma and brought off many men who had fallen, carrying them down to the shore.

It must have been a terrible sight after such an awful struggle?- It was terrible; the wreck of battle was there in all its horrors, but our duty was to find, succour, and carry off the wounded, and we hurried on with our work of rescue regardless of anything else.

Did you bring off any trophies from the battlefield? - Yes; one which was very much treasured by my family, but, unfortunately I parted with it to a friend, to the great regret of my people, who looked upon it as a kind of heirloom. It was a Russian gun and bayonet, picked up by myself at a point where there had been a great struggle.

That bayonet, continued Mr WHITE, had a curious history. During the Fenian agitation in Ireland all arms were seized, and my trophy was taken among the rest to Dublin Castle where it remained for a considerable time. I appealed to the Earl of Zetland, then Lord Lieutenant of Ireland, telling him the particular incidents associated with the trophy. It was ultimately forwarded to me from Dublin Castle, carriage paid, to my great relief and joy.

You witnessed the terrible carnage at the Alma then ? - Yes; all what you could see of it. When it started as many of us as could possibly be accommodated swarmed to the masthead, and we had a grand view for a long time, but gradually it over-clouded, overpowering everything, and the view was closed. We could hear the fearful roar, but we could see nothing more of the action; we then came down from aloft though the battle hurtled on with ever increasing force to the end.

And your other engagements - what did they include ?- I may recall the engagement at Canton, when I was with the Naval Brigade, under Sir Robert MC CLURE. There was also there an awful scene. I was with the 500 blue jackets landed, and joined in the charge on the Chinese, under Lord GUILDFORD, later on the Earl of Clanwilliam, who recently died. The Chinese had come down in terrible force, determined to chase the, Blue Devils, into the sea. They soon found out their mistake, for they were moved down in thousands. Lord GUILDFORD was as brave a man as ever lived, and he was the first to be wounded.

Other service perhaps you may remember ?- Yes; I was in the Baltic affair in the warship RUSSELL, and though we were not engaged we remained throughout the trouble.

That was the famous battle of the Baltic ? - Yes

What other event did you participate in ? - I was at the Island of Lebuan Affair, Commander James A. GORDON being in charge of the WOLF. The commander�s father was Sir James A. GORDON, Governor of Greenwich Hospital. He was known in the service as, Peg-leg Jimmy. He saw much service and lost a leg at the battle of Lissa. He received a gold medal for his bravery. Later on when he was about to receive a K.C.B, the Admiralty asked him to give up his gold medal, but he refused, preferring the gold token commemorating the loss of his leg to the honour of his K.C.B. His sturdy refusal was reported to the Admiralty, who ultimately did not disturb the gold medal award, but conferred it in addition to the honour of K.C.B, which was accordingly done.

Details of WHITES service are as follows:-

It was about 1860 to 1861 that Mr WHITE who was bosuns mate at the time, came very much in contact with Lord Charles BERESFORD on board the frigate SUTLEJ, then doing duty in the Pacific. The bosuns mate is the mouthpiece of the Lieutenant and in that capacity Lord Charles and WHITE were thrown continually together. The friendship ripened as time went on, and was renewed on the Liverpool Landing Stage with great cordiality.

The number on Mr WHITES ticket on joining the navy was 301267. He was born at Dublin on 26th Aug 1822 and he joined at the age of 17, entering first the receiving ship SPY a brigantine, Capt BEAVIS being then in command. The WOLF was the first ship he served on in his junior grade. The WOLF went out on a commission to China, Admiral Courtney Osborne HAYES was Captain. He died some years ago and his widow sent a photo of the late Admiral to Mr WHITE which is highly cherished.

Admiral LOWTHER, residing in St Leonards-on-sea, is the only officer surviving who belonged to the WOLF.

Mr WHITE added that he was present when the Rajah of Sarawak took possession of the Island of Labuan, one of the Straits Settlements. It was then a desert island, only wild pigs and goats being visible on it. It has since become a great Settlement, coal being found in considerable quantities, this giving the island great importance as a Naval station. It was the WOLF that practically opened up the Free Trade Policy of Hong Kong.

Mr WHITE also served in the ASIA, the flagship of Admiral Sir Phipps HORNBY, whose son, Sir Jeffrey HORNBY died not so long ago. It was the latter who during the Turkish War, preceding the, peace of honour, days of BEACONSFIELD and SALISBURY, was ordered to proceed to Constantinople with his ships and force the Dardanelles - a task of fearsome responsibility.

Mr WHITE also served on the TRAFALGAR which he joined in 1851 and was paid off on the 11th Apr 1855. It was on this ship that he appeared before Sebastopol, where he saw a great deal of service.

He was also on the HORNET were he served under the Earl of Clan William - then Lord GILLFORD - from 21st Dec 1858 to 14th July 1859. He passed on afterwards to the TRAFALGAR serving on board her from 27th Aug 1859 to 8th Oct 1862. WHITE, not to speak of other incidents finished his career on the HEAR US.

He received the Crimean medal and clasp for Sebastopol, the Turkish, the Baltic medal, the China medal, the Canton clasp, and the Fatcham clasp.

After leaving the navy in which he would have liked to remain. WHITE became an extra man in the Liverpool Customs for some years, when, owing to the age limit, he had to, leave. He has been retired for over 20yrs. He was for a time well known as an instructor officer on board the CLARENCE. He also acted as an instructor at Mount Bernards Reformatory, Leicestershire.

Mr WHITE received the following letter from the gallant and courteous Admiral, dated from the flagship on the 7th inst :-

Dear Mr WHITE - I was delighted to see such a fine specimen of an old British man-of-war man as yourself. More particularly as we were shipmates so many years ago on the SUTLEJ in the Pacific. I congratulate you on being so hale and hearty and cheery at your advanced age, eighty five. I am sending you a photograph, which I hope you will accept as a memento of our being shipmates so many years ago. May all good luck attend you - Yours very sincerely, CHARLES BERESFORD.

The photograph which bears Lord Charles BERESFORDS autograph, will in future be an heirloom in the old mans family

Channel Fleet in the Mersey Aug 1907