CHANNEL FLEET ON THE MERSEY

Never before has so many warships anchored in the Mersey at one time, as the fine array visited Liverpool this week. There were fourteen battleships and three cruisers, there presence here was in connection with our septcentenary celebrations. It is seven years since any part of the Channel Fleet was with us, but on this occasion we extended a cordial welcome to a larger and more influential section of the British Navy - the best of the fighting ships belonging to the Channel Fleet, under command of Admiral Lord Charles BERESFORD. Much as the historical pageant quickened local patriotism the Channel Squadron visit was in popular estimation, a more attractive event, and had been eagerly anticipated.

Their arrival on Tuesday was witnessed by many thousands of people on the Landing Stage, along the line of docks, on Seacombe and Egremont promenades, New Brighton Pier, and every part of the river banks. The fleet steamed easily up the channel on the flood tide, reaching their anchorages just as the ebb commenced.

At 9 o' clock, the Lord Mayor, the chairman of the Dock Board and a party left the stage in the Dock Board tender GALATEA to meet Lord Charles BERESFORD in mid-stream to accord the Admiral and his officers in a warm civic welcome.

The GALATEA proceeded beyond New Brighton catching the first glimpse of the fleet on the horizon in the vicinity of the bar. Presently all the warships entered the Crosby Channel in a straight line, the rear ship the VENGEANCE being about 5 miles beyond the leader the ILLUSTRIOUS. It was a majestic and thrilling sight, a procession of Britain's finest warships, an evidence of her maritime greatness. Procession in the following order:-

At 10.15 all vessels had reached their mooring stations and the anchors cast simultaneously. The line stretched from the training ship CONWAY, where the ILLUSTRIOUS was anchored to New Brighton Pier, opposite which the VENGEANCE was lying, Lord Charles BERESFORDS Flagship was opposite Wallasey Cattle Stage. No sooner had the ships moored when a busy scene followed, boats and launches were lowered from the ships and were speeding to shore. Tugs left the Landing Stage full of sightseers who were soon spreading their course between the naval giants. 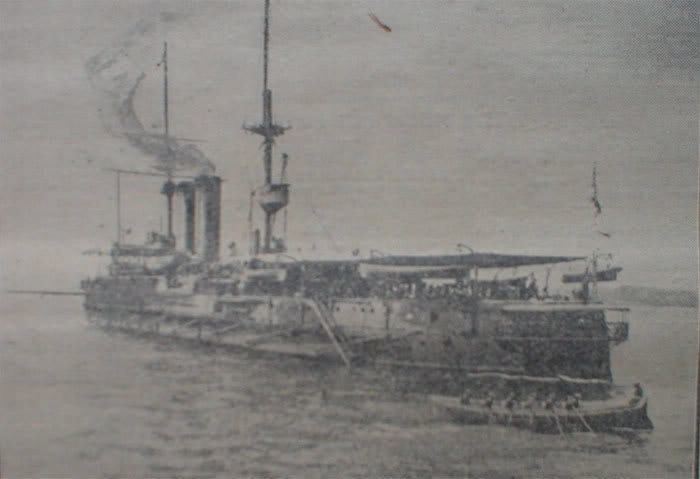 The Lord Mayor on the flagship.

As soon as the flagship was at anchor , the GALATEA with the Lord Mayor and party on board, went alongside and were soon on the quarter-deck receiving a cordial handshake from the breezy Admiral, who introduced his officers.

"And now" said Lord Charles, the formal greeting over, "we'll go below" and he led the way downstairs to his beautifully furnished quarters.

Here "creature comforts" in the form of champagne for the majority and ginger ale for the teetotallers such as, the Lord Mayor and Mr William CROSFIELD. Also cigarettes and cigars for the smokers in the party were handed out.

With a large glass in his hand and a genial smile on his face Lord Charles BERESFORD gave a toast. After the formalities were over he gave his excuses to the company saying he desired to meet his brother Admirals, who were coming from the flagships to pay their compliments to the Lord Mayor. He at once descended the quarter-deck and summoned all the journalists and addressed them. He said, how delighted he was with the welcome, and that it was a great compliment to the fleet and they appreciated it. 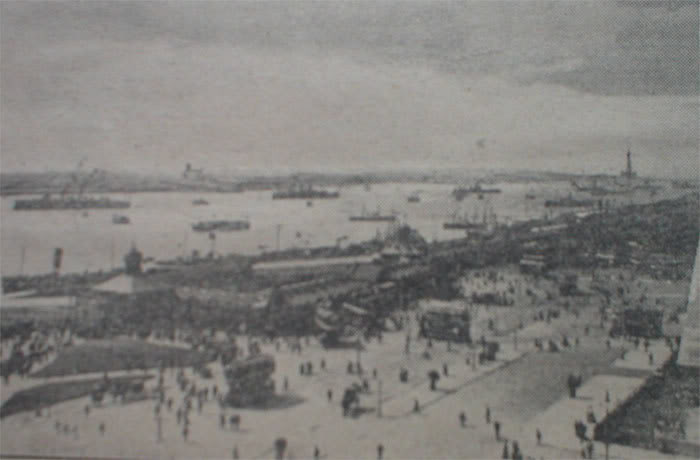 View of the Channel Fleet from the Pier Head

Lord Charles and the old sailor.

When Lord Charles BERESFORD came to the Landing Stage to pay the official visit to the Lord Mayor a very touching incident occurred. There were a number of police waiting the arrival of the officers of the fleet. A very old man, stooped and grey-headed slipped through the police ranks to the space in front.

"Lord Charles", he shouted, and held out his hand. The Admiral saw the old man was wearing four medals, he looked at these and the old, agitated figure before him. Saying "Is that you WHITE ?"

"And what was the ship we where on then ?" asked Lord Charles.

"The SUTLEJ, in the Pacific Sir" replied the old man.

Lord Charles shook his hand again telling WHITE to wait his return and have dinner with him on the flagship.

The invitation was of course a command.

Admirals and Officers on shore

Lord Charles BERESFORD, Vice Admiral Sir Richard CUSTANCE, Rear Admiral LOWRY and about a dozen officers paid a return visit at noon to the Lord Mayor at the Town Hall. Light refreshments were partaken of in the Lord Mayor's parlour and the Lord Mayor and Mr Robert GLADSTONE accompanied the visitors to the Exchange Newsroom. The short route across "the flags" was densely thronged with cheering spectators, a fine compliment had been paid to the navy by the decoration of Nelson's statue with a huge wreath of evergreens. Mr William ADAMSON dept chairman who was accompanied by Mr J. PARK, Asst secretary received the visitors at the door of the Newsroom, the balcony was reached and lusty cheers were given to the commander and his officers as they passed on their way.

Blue Jackets at the Pageant

500 bluejackets who attended the pageant were selected from all the crews of the Channel Squadron. Commander Charles Le MESURIER of the HINDUSTAN was in charge of the party. A small party of Marines under Lieut BIRD accompanied the bluejackets.

26 officer and 400 blue jackets of the 2nd Division of the Channel Fleet attended the Shakespeare Theatre on Tuesday evening. Also at the Royal Court Theatre on Tuesday W. W. JACOBS delightful comedy "Beauty and the Barge" was witnessed by 400 blue jackets. The way the tars entered into the spirit of the comedy was a source of the keenest enjoyment.

The Mersey Mission to Seamen entertained a large number of the Royal Naval Temperance Society from the Channel Fleet on Tuesday afternoon and evening.

On Tuesday over 21,500 people inspected the fleet, Wednesdays patronage was almost as heavy. Disappointment was felt that the Channel Squadron would not be illuminated during their visit. 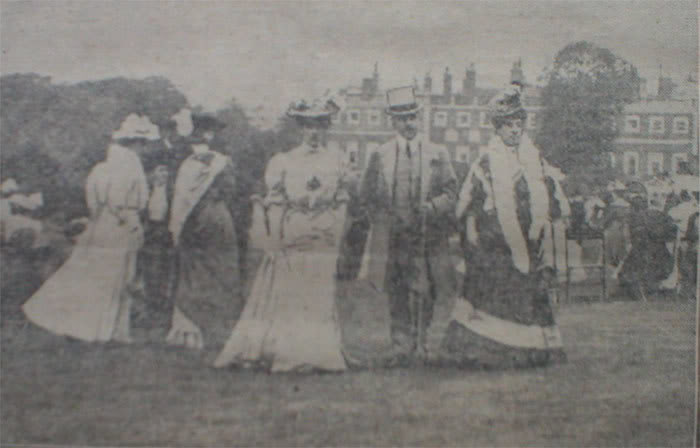 Knowsley Park the chief seat of the Derby family was on Wednesday the scene of the most brilliant and imposing gathering held within many miles of Liverpool 4,000 guests assembled at the historic domain at a garden party given by the Earl and Countess of Derby. From 3.30pm to 7pm the guests were entertained with lavish hospitality, the function chiming in happily with the celebrations of pageant week was heartily enjoyed. Lord and Lady DERBY received their visitors on the broad terrace overlooking the beautiful ornamental gardens, the guests were at liberty to roam through the grounds and explore the rich beauties of the historic mansion at their pleasure.

The scene in the grounds was a striking, picturesque, animated one, and in the massing of colour the uniforms of the naval officers showed up well against the dainty summer dresses of the ladies. An excellent programme of music was discoursed by the 1st East Lancashire Volunteers under the baton of Lieut S. B. NORWOOD.

Vice Admiral Sir Reginald CUSTANCE and 60 officers of the fleet including the Captains of the various ships were entertained at a luncheon at the Conservative Club on Wednesday. A large number of quests including many ladies welcomed the Naval Officers and a reception was held by Sir Robert HAMPSON [chairman] and Lady HAMPSON in the morning room of the club.

The New Brighton and Hoylake lifeboats were on Wednesday inspected by Lord Charles BERESFORD, both boats were fully manned and brought alongside the KING EDWARD V11 were Lord Charles BERESFORD stepped on board and made a minute examination. He complimented the men on everything he had seen, chatting freely he expressed his pleasure on his visit to Liverpool.

On Wednesday the approaches to the Seacombe Ferry and the whole length of the promenade between Seacombe and New Brighton were thronged with people anxious to catch a glimpse of the contingent of blue jackets who were to spend the afternoon and evening in New Brighton Tower. The blue jackets about 1,000 and some 10 officers were landed in three detachments by the Wallasey Ferry Steamers. The visitors thoroughly enjoyed the 5-6hrs entertainment the Tower management provided for them.

On Thursday afternoon the Reform Club gave a reception to the officers of the fleet and from 5-6pm the pageanters were received on the Admirals flagship.

At 5.30pm 1,000 blue jackets were given a banquet at St Georges Hall, and at 9pm there was an officers private dance at the Wellington Rooms.

The fleet will weigh anchor and leave the Mersey on Friday morning.