The exhumations at St Peter's churchyard 1868 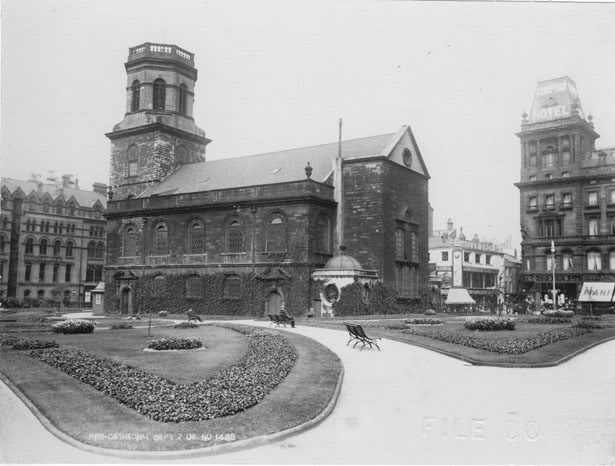 The exhumations at St Peter's churchyard

The work of disinterring the dead in that portion of St Peter's Churchyard required for the widening of Church St is very nearly completed. As a rule, this "city of the dead" has yielded little beyond the bony fragments of those who lived and moved, and had their being many years ago, and a reference to Hamlet's soliloquy over, "poor Yorick's" skull will render unnecessary any moralising upon the condition to which we must at last all come to. The space taken seems to be literally "packed" with human bodies, tier over tier, to within a short distance of the surface of the ground. In some cases as many remains as were sufficient to fill half-a-dozen coffins had been taken out of a single grave, and it was quite an exception to the general rule to meet with a grave in which there was only a single bone, every other vestige of its occupants having been resolved to dust. On the other hand, instances occurred in which the skeletons had been preserved with tolerable perfectness, and upon some of the skulls, hair five or six inches long was found, giving them a still more ghastly appearance.

Among the latest discoveries was a half-penny embedded in the socket of the eye, the coin having no doubt been placed upon the eyelid to keep it closed after death, and an iron foot rest that had been buried with some poor cripple.

One singular exception to the general process of decay has been met with, and that is in the case of a man named David GWIN, a sea captain, whose trunk is said to have been a hard as stone, while the other portions of the skeleton were decayed.

The total number of graves marked on the plan as being disturbed is 327, but there are considerable spaces which, though not marked as occupied graves, where found to contain large quantities of human remains, and altogether not less than 2000 bodies have been disinterred. The act of Parliament which authorised the work permitted relatives to undertake the removal of the remains of those who had been associated with them by family ties, at an expense to the corporation not exceeding 10 pounds in each case, but in one instance only has this right been exercised. In two other cases, relatives have communicated with the officials, but they have allowed the work of removal to be performed by the authorities. The vast majority of the dead, however, seem to have no kith or kin who remember them, or, at any rate, who take any trouble about what is being done with all that is left of them. But, in fact, every possible care has been taken not to offend the most delicate sentimentality, a great deal more care than would seem to have been the case at the time when Mr PICTON, in his schoolboy days, remembers to have seen the bones of the dead dug up and burned in order to make room for fresh candidates for grave space.

The contents of every grave have been put in separate shells and re-interred in separate graves in Anfield Cemetery, every stone has been carefully preserved and will be used to mark the place of re-interment. Even the soil is to be kept from profane uses, and is carted away to the delf in Anfield Cemetery, while the operations have been jealously guarded from public curiosity by hoarding on each side, covered in at the top. In order to prevent any human remains being left, the excavations have been carried down to the clay, and at some places a depth of even ten or eleven feet below the ordinary street level has been reached. At the lower end of the churchyard, nearest to Church St, the soil was comparatively dry, but at the upper end a great deal of water was met with, considerably impeding the operations. The coffins at this portion, however, were in a better state of preservation than in the dryer soil, but, of course fell to pieces as soon as they were touched, streams of water issuing from them. A slight smell is then perceptible, but otherwise the work is not of the offensive character which might be supposed, and the men engaged in it show as little concern as did ever the gravedigger over whose insensibility Hamlet moralises.

This wholesale disinterment has been performed in a very satisfactory manner by Mr A. THOMAS, contractor, while upon Mr R. J. ROYLE and Mr MACMILLAN has been devoted the duty of keeping a record of what has been done with the remains of the long-forgotten dead. As soon as the remainder are completely removed, the breadth of land obtained will be thrown into the street and paved, and in a few weeks a living tide of humanity will be flowing along the space but recently occupied by the dead.