Police Constable Richard NORTH, of Liverpool City Police Force, who is affectionately known as, Old Dick, retired today after 32 years service, during which, as custodian of the dock in the third or Drunks Court, more than a quarter of a million offenders passed through his hands. In cases where deaf and dumb people were accused he interpreted the proceedings to them by the deaf and dumb alphabet. He was noted for his kindness and consideration towards prisoners.

Alderman ROBERTS on behalf of his fellow magistrates, expressed appreciation of the able service of Police Constable NORTH, and wished him good luck and health in his retirement.

Mr W. A. BOLTON for the magistrates clerks, and Mr W. S. OLIVER, for the prosecutions department, added tributes.

The March Past of the Bootle Police Force during the annual inspection yesterday by Lieut Colonel F. BROOKE, who is in the foreground on the left, with the Chief Constable, the Mayor and members of the Watch Committee.

Superintendent HUGHES, who is 60, joined the Liverpool force in 1900 as a police constable. After 2 years of street duty he was transferred to the Criminal Investigation Department, where he remained until he was made superintendent. For a time he was at police headquarters in Dale St. He was promoted from inspector to superintendent in September 1922. He has been in charge of E. Division for more than 16 years and is one of the most popular officers in the force.

When promoted Superintendent he was transferred from the C.I.D, to the uniformed branch. He wears three merit badges, and has been rewarded on numerous occasions for his work.

During his service with the C.I.D, Supt HUGHES was commended by the Home Secretary and by the Director of Public Prosecutions. He possesses the King George V. Jubilee medal and the King George V1, Coronation medal. He has been awarded the Silver medal of the Watch Committee for good service.

H. M. Inspector of Constabulary, Lt Col F. BROOK, inspecting the mounted police at the annual inspection of Liverpool City Police in Sefton Park today. He was accompanied by the Lord Mayor and the Chief Constable Mr A. K. WILSON.

Captain A. C. DAWSON, of Birkenhead

The impending retirement of Chief Constable of Birkenhead, Captain A. C. DAWSON, is mentioned in the minutes to be submitted to next Wednesdays meeting of the Birkenhead Council.

The Council will consider a recommendation of the Watch Committee that applications for the position be invited by advertisement. The salary to 850 pounds per annum rising to 1,100 pounds.

Captain DAWSON who became Chief Constable of Birkenhead in May, 1923, was formerly a member of the Liverpool City Police Force for 27 years. He was educated at a private school in Cheshire and in Liverpool and afterwards went to work in a Liverpool shipping office. After 8 years he joined the Liverpool City Police in February 1896 as a constable. He was promoted to the rank of Sergeant in October 1898, to Inspector in July 1907, and to superintendent and deputy chief clerk in December 1912.

He was presented with the Kings Police Medal in January 1933. A short time after this he received special commendation from the Birkenhead Council on his work in connection with a serious outbreak of rioting during unemployed demonstrations. In 1933 he was elected president of the Chief Constables Association and in 1937, as chairman of the championships council he acted as host to police athletes from all parts of the British Isles at the tenth annual police athletic championships at Imber Court, Surrey.

Captain DAWSON is an expert on licensing and has shown keen interest in the organisation of motor patrols and traffic signals. He has often been out spoken in his comments during his annual reports.

Slander of a Private detective

He sued Albert Dixon, a former Liverpool detective sub-inspector and now a private detective, for slander.

Mr Justice Lewis ordered that the documents should be impounded.

The action arose out of a traffic accident in which the son of a police sergeant was injured. It was stated that Kane saw the accident and made a report. A claim for damages was made on behalf of the boy and Dixon was employed by an insurance company to investigate the accident.

The alleged slander, spoken by Dixon to another Liverpool police constable says :-

That case is coming off at the Assizes next week. I do not want to make any trouble with Kane as he is a decent lad, but I have got ample proof that he did not witness the accident. I am afraid I shall have to report it to the Chief Constable for disciplinary action as the evidence is perjured.

Dixon denied that he ever used these words, and said he had never attempted to justify the words attributed to him.

Liverpool Watch Committee today appointed Chief Superintendent Hugh MILROY, at present in charge of A. Division, Liverpool City Police as Second Assistant Chief Constable of Liverpool for the duration of the war.

Chief Inspector Thomas KAY, who rejoined Liverpool Police Force a few hours after the outbreak of war as liaison officer between the police and A.R.P control, has retired. He originally retired in July 1934 after 25 years service with the Liverpool Police Force . He started his career as a constable with the West Riding Police Force in 1906. He is 57, years of age and lives at Heydale Rd, Allerton

Hastings Watch Committee have unanimously decided to appoint Inspector Angus Gordon CARGILL of the Liverpool City Police as Chief Constable of Hastings. Inspector CARGILL who is 34 was awarded the British Empire Medal in the last New Years Honours List, and was educated at the Morgan Academy Dundee, the R.A.F, College of Cranwell, St Andrews and Liverpool University. He was appointed a constable in the Liverpool Police Force in April 1928, performing both police control and fire brigade duty. He was promoted sergeant in April 1934, becoming an instructor in the Liverpool police training school. In July 1939 he was appointed inspector. Inspector CARGILL holds a Home Office air raid precautions special certificate and at the outbreak of war was attached to the Liverpool air raid precautions main control.

Chief Inspector R. FREEBOROUGH appointed superintendent by Liverpool Watch Committee. He is 49 and joined the police force in 1920. He was company sergeant major in the last war.

Inspector Thomas M. SKELTON, of E. Division, Liverpool City Police, who received a bar to the B.E.M, for bravery in the Docks of Liverpool and during air raids has been appointed Chief Constable for Hyde Cheshire.

Insp SKELTON, who is 40, lives at Parkhurst Rd, West Derby Liverpool, he joined the Liverpool Police in 1920 after serving in the army.

He last year was awarded the Belgian Croix de Guerre for the part he played in removing ammunition from a Belgian ship hit by incendiaries during a raid on Merseyside. 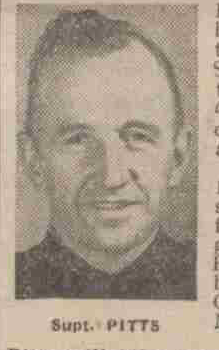 Chief Inspector William E. PITTS of E. Division, Liverpool City Police, has been promoted to the rank of Superintendent at the early age 0f 43, he joined as a constable 25 years ago.

A native of Rowsley, Derbyshire, he was formerly a telegraphist in the R.N.V.R. He holds the Police Good Service Medal.

Temporary Inspector MENZIES was appointed to the force in January 1921, and promoted to the rank of Sergeant in 1935. He has been commended and made an award by the Watch Committee, for his invention of a bicycle radio. He is a wireless expert.

Temporary Inspector COWLEY has been awarded and commended by the Watch Committee eight times for police duties since joining the force in 1923. He was promoted Sergeant in 1934. He will act as liaison officer between the Chief Constable Mr H. WINSTANLEY and the Chief Warden, Major J. BENNETT.

During his 23 years as Head of the Recruiting and Training Department of the Liverpool Police Force, Chief Inspector John T. McKENZIE has trained six men who are now Chief Constables and several other high officers in the Force and police forces of neighbouring boroughs.

A member of the Police Force for over 41 years Chief Inspector McKENZIE is to retire at the end of the month.

Altogether he has examined more than 7000 candidates for promotion, and has trained about 600 War Reserve Constables.

In August 1919 during the police strike a large mob was reported to be pulling down gates at the Liverpool Docks. He took 400 men with him and successfully cleared the area. These men under Chief Inspector McKENZIE earned for themselves the title of, Flying Squad, and did splendid work.

Chief Inspector McKENZIE who is 63 and lives at Hampstead Rd, Fairfield, supervised the training of the Ambulance teams which won the Northern Counties Championship on six occasions. Two of the teams also won the All England and Wales Championship Trophy.

Mr and Mrs Frederick BODDY, Leasowe Rd, Wallasey, who today celebrated their 52nd wedding anniversary. Mr BODDY aged 78 was formerly a constable in the Liverpool Police Force and holds the Police Long Service and Good Conduct Medals. He has been a Methodist local preacher for 52 years, Mrs BODDY is 83 next month.

They were married at St Cuthberts, Robson St, Everton in 1893 and lived in Everton for 25 years. They have two sons, two daughters and five grandchildren.