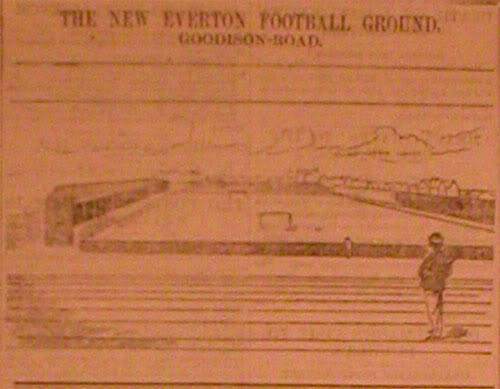 Everton Football Club and its ground

An extraordinary general meeting of the members of the Everton Football Club was held last evening at the Lecture Hall, Everton Rd, to consider a proposal to form the club into a limited liability company. Mr BARCLAY presided and nearly 300 members were present. Mr HOULDING proposed that the club be formed into a limited liability company, with a capital of £1,000, leaving an additional £6,000 on mortgage. He explained the difficulties which had arisen with the landlord of the adjoining land, and to meet this he proposed the foregoing scheme. Mr CLAYTON in a lengthy speech, opposed it, and the discussion grew irregular and personal. To get to business Mr MAHON proposed an amendment "that the scheme be not accepted" and this was carried by a large majority. This put the committee into a fix, and it was ultimately decided that they endeavour to arrange with Mr HOULDING to acquire the land and report to the members a month hence.

When the Everton Football Club decided to quit Anfield Rd, and take possession of the Goodison Rd Estate placed at their disposal, one of the parting shots fired at them by the Houldingites was, "That it would be impossible for anyone to get the place into anything like condition to play first class football on by the 1st of September, and that when the time arrived, the club would find itself in a hole."

No doubt the wish was father to the thought with one or two of them. But we should like to know their opinions on the matter now, and also what they think of the efforts of the Young Everton party and their splendid achievements at Goodison Rd.

The place has been transformed from a morass into one of the best appointed athletic enclosures it is possible to clap eyes on, and all this has been done in the space that intervened from the close of the last football season.

That the committee of the Everton Club were put on their mettle in effecting such a change can be well understood by those who saw the wilderness of Goodison Rd before the magic wand of Mr KELLY, the contractor, was passed over it. The utmost credit is due to the gentleman for his work. He entered heart and soul into the undertaking , and appeared imbued, along with the committee of the club in letting the cynics see what could be accomplished.

The ground is very extensive - perhaps too much so - and an ordinary crowd will almost get lost in it. It is capable of accommodating a couple of the old Anfield enclosures and then allowing room for knocking about. There is a stand backing up to the Mere Lane side, that goes nearly the full length of the field, and is capable of seating [so Mr KELLY tells us] over 5,000 people. It is built gallery fashion, so that every person who goes on it might expect to have a comfortable and obstruct less view of the game, and will be well sheltered from the biting east winds, which are so prevalent during the football season. At the rear of this will be found a training track for the players, which the "sprinters" of the party will find very useful. Underneath the stands all sorts of accommodating offices have been built. Here will be found well appointed bathrooms, dressing rooms, w-c's, storerooms, offices for the secretary, and a private room for referees, access for the latter being made from the field of play.

So that, the players will not have to parade themselves through the street, as was the case at Anfield Rd, in all their "warpaint," and, what is of more importance, visiting teams will not have to "run the gauntlet" through a crowd of incensed partisans, whom they might probably displeased in some manner on the field. Here also will be found a telephonic apparatus, connecting the Football Echo offices to the ground, which will enable us to give the results of the matches, as we did from Anfield, immediately the game finishes. Then, at the end of the ground strong well built galleries have been erected computed to accommodate at least 10,000 persons, and the Goodison side has been banked up in such a manner that from 15,000 to 18,000 people can arrange themselves along it in the face of the ornate stand opposite, and thus not only get a full view of the game being played, but also of the entire field and its occupants without the least inconvenience to themselves or their neighbours.

Of course all this hard work has not been accomplished in the short time Mr KELLY had at his disposal without an expenditure of much labour and anxiety, as he was under a penalty to get it finished at a certain date. Now, however, that he has finished - or nearly so, as there are still the "finishing touches," to be put on - he can sit and contemplate his magnificent handiwork with much equanimity of mind.

The turf, which has a "bottom," on though it has been growing at Goodison Park for ages, is in the best condition to meet the hard work it will be subjected to as soon as the close season ends. Most of it, we believe, has been cut from Aintree, and the men have had an excellent time for laying it down. Many hundreds of cart loads of cinders and other refuse have been brought in for draining and filling up purposes, and the place will altogether present on the opening day one of the finest, best equipped, and most comfortable, football resorts to be found in the kingdom.

The "official opening," takes place on Thursday the 27th inst, and to mark the event the Everton Committee have succeeded in inducing the President of the English Association, Lord KINNAIRD to wit, to perform the opening ceremony. The occasion, too, will have the additional attractions of a pyrotechnic display and other illuminations and the band of the Prince of Wales Own Regiment has been engaged to give a musical performance during the day.

The committee however have entered into a "conspiracy of silence," as to who the new players are, or what the constitution of the respective teams will be, but as the secret cannot remain one for much longer, the public will be able to judge for themselves what prospects the club will have if repeating their splendid performance of the season 1890-1 when they carried off the League Challenge.

That other clubs have been wide away to strengthening their position in the matter of players and holding their own in the coming struggles is pretty generally known and our hope is that now the Everton Club have shaken off their shackles, which for several seasons past cramped them, unanimity of feeling and good fellowship will be their motto, and, that no petty jealousies will upset, or try to upset, the bright future looming in the near distance. That it will get public support there is no fear, for the ground itself will form an attraction. It is close to a populous neighbourhood, easy of access from all parts of Liverpool, and close to tram and train.

The opening "kicking," ceremony, on the 1st of September, will be performed by Bolton Wanderers, and it is hoped, Mr MAHON will undertake the initial, "kick off," which would be a fitting tribute to the enterprise he has shown in setting the ball rolling at Goodison Rd.

On the Saturday following Notts Forest commence the League battle.