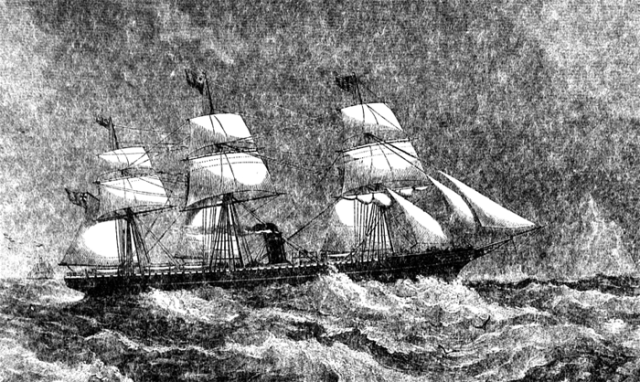 It is 43yrs since the Inman liner CITY OF BOSTON [Jan 28th 1870] sailed from Halifax for Liverpool. She had on board 55 cabin, 52 steerage passengers and a crew of 84, making 191 all told. None of these people reached home, nor was the least trace of her ever discovered.

She was commanded by Capt HALCROW, one of the most amiable and popular men, who at that time traded out of this port.

With singular pleasure I give a portrait of him - there was no zinco-engraving in those days, you will bear in mind -- it is the first time a photograph of this famous old commander has been published 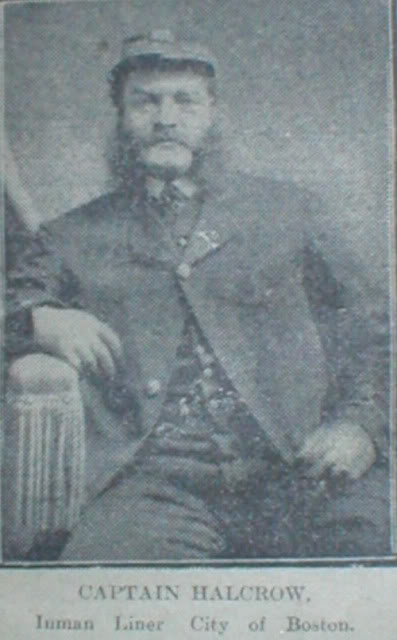 The CITY OF BOSTON represents one of Liverpool's historic shipping disasters, and her name will always form one of the main items in that list of Atlantic liners which so briefly, eloquently and pathetically is headed "never heard of." Suppose she had Marconi wireless on board, then it might have been otherwise.

The CITY OF BOSTON was a woeful shock to this district, indeed to the whole country. She had some officers of the Royal Artillery and other regiments on board, who were returning from Canada.

One of those in an official capacity, who saw her sail from the Mersey and still survives amongst us, thinks, that she, like the TITANIC, struck an iceberg. The ship was one of the best afloat, powerfully engined and built of iron, material far better for running into ice, than the present day more brittle steel. She was a ship rigged and had a large spread of canvas.

It was said that the wife of Capt HALCROW merely considered her husband as "overdue" for 20yrs and she used to leave a light burning every night, so that if he came home suddenly it would be a welcome to him.

A widow in Detroit lost an only son, she subscribed to a Boston paper believing it would have the news first, and for many months read the issues. She set her sons plate at table during this time, saying, "I have not heard from Willie yet but I hope to get news this week."

The late Capt MYLCHREEST who commanded the KING ORRY, was quarter master on the CITY OF BOSTON, he failed to join her and so saved his life.

The late Mr William INMAN the owner, was terribly cut up at the fate of his favourite ship.

There are more, never heard of, Liverpool ships besides, the PRESIDENT due in Liverpool in March 1841, the CITY OF GLASGOW, also of the Inman Line, who sailed from Liverpool March 1st 1854, the LADY MARGARET transport, May 1854, and at the end of March 1856, the PACIFIC of the great Collins Line.

List of passengers and crew on the City of Boston

The vessel had a crew of 84 men

Capt BULMER of the HELENE MARION arrived at Spithead in distress from New York to Antwerp. She left New York the same day as the CITY OF BOSTON and on the night of the 19th January she met with a hurricane, from SE to SW, which, while hove to, took away the foremast and jibbon, new sails were taken completely out of their gaskets and blown away. Capt BULMER believes that the CITY OF BOSTON must have been in the same hurricane.

Message in a bottle

The CITY OF BOSTON

A paper was this day picked up at Waterloo, in a stone bottle, purporting to relate to the City of Boston, as follows;-

The City of Boston is fast settling. We have lost 4 men overboard, 3 have died. We are. in great danger of our preservation. The ship is on fire, and hurrying all the passengers to the bows. We have had to come on under canvas. Our propeller is broken, and we are now at the entire mercy of the waves. God help us, I ham hon my bare feet hand ave been all the weak.

This was enclosed in another paper which was written :-

I am, Sir, your obedient servant,

A. W. COULSON, Assistant-Receiver of Wreck.

We are informed the names signed do not appear on the articles of agreement with the crew. If, therefore, the paper is not a hoax it must be signed by passengers.