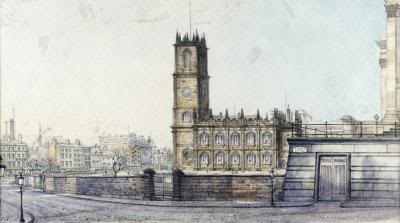 In order to carry into effect the proposed improvement in the principal approach to the town from London and Manchester, it was found necessary either to purchase, at a very considerable expense the property on the right side of St John's Lane, or sacrifice a part of the churchyard on the other. The latter alternative was, at length, determined on. On the 14th ult, the exhumation of bodies was commenced, and. although, since the alteration was contemplated, the interment of bodies has been prohibited within its range, as this churchyard has been used as the parish burying ground for a number of years past, this was necessarily a difficult and revolting work. Notwithstanding the above judicious precaution, all along the line of excavation, which runs about ten feet deep, the ground was found filled with a compact mass of coffins. These, and the loose bones, which were found scattered about, have been deposited in another part of the churchyard, the soil, freed from all visible portions of the human body has been carefully carried away, and deposited in the new cemetery, near the church of St Martin-in-the-Fields, at the north end of the town. The bodies, considerably exceeding 2000 in number, have been removed with the greatest care and delicacy, and the workmen have behaved with exemplary patience and fortitude.

It was generally found that the coffins and bodies lying in situations of the greatest depth and moisture were much more perfect than those nearest the surface, and in comparatively dry ground. In the progress of the work singular appearances were presented. In many instances some parts of the corpse would be fallen to entire decay, whilst the face, or other fleshy part of the body, would appear comparatively perfect, but, upon being touched, the apparent substance mouldered into dust, or was found to consist of a kind of soft soapy substance, containing a considerable portion of greasy moisture. The first appearance of a body found at the greatest depth was that of an imperfect mummy, the face of which appeared nearly perfect, in full flesh, with a slight bloom upon the skin, the cotton and worsted which had been spread over the breast were perfect, the body had entirely fallen to decay. From a woollen jacket, which had resisted the operation of decay, found in a coffin, there fell four guineas, two half guineas, and two seven shilling pieces, the money was divided amongst the workmen.

The exertions of Mr HARRISON the churchwarden, and of the agents of the Corporation to carry on the work in the most unexceptionable manner, and prevent improper intrusion during its progress, reflect the greatest credit on their judgement and humanity. Mr JONES, who has had the management of the excavations, has also acquitted himself in a very creditable manner, and the public may rest assured that every portion of earth appropriated to the purpose of interment has been removed.