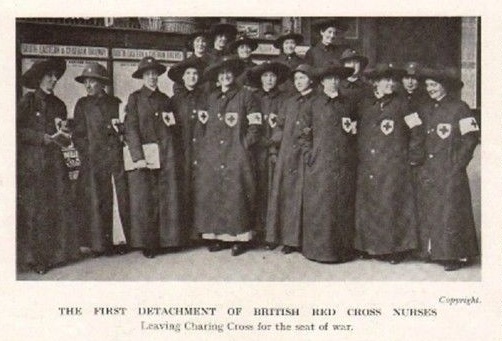 The Navy and Army Illustrated, August 29th 1914
The first detachment of British Red Cross Nurses
Leaving Charing Cross for the seat of war.

Devotion of a nurse

A silver medal has been awarded to Miss Alice STEPHENS, a British nurse at the Houlgate Temporary Hospital, who contracted typhoid fever while attending, with great devotion, patients suffering from the complaint.

An interesting ceremony took place at Steenvoorde, near Hazebrouck, where Miss Florence BURN, a British nurse attached to the French Army, was decorated with a bronze medal, conferred upon her by the French Government, for her services in nursing infectious cases at a temporary hospital.

Sister Margaret BLUNDELL, of Hope Hospital, Pendleton, Manchester has been awarded the 1st silver medal [presented by Mr F. TOWNSON, ex clerk to the guardians] for excellence in nursing and conduct. Her home is in Palmerston Ave, Litherland, Liverpool.

Many of her friends in Liverpool, Lancashire, Cheshire and elsewhere, who since the beginning of the war have had experience across the Channel of her kindly care and skill in base hospital, stationary hospital, casualty clearing station, and in ambulance trains will be pleased to hear that the Royal Red Cross Class 2, has been conferred upon Sister Beatrice Stanhope TINKLER, daughter of Mr and Mrs George TINKLER, 72 Devonshire Ed, Liverpool. Trained in Salop, her work since has been almost wholly in connection with Metropolitan hospitals. Her brother Lionel Maughan TINKLER, was awarded the Military Cross for deeds done at the Somme in the early days of July, 1916.

Liverpool and Warrington have a goodly number of names for awards of the Royal Red Cross for war services. In the number.

Miss THOMAS, who is well known in Liverpool and has for a number of years been associated with the nursing staff of the Royal Infirmary where she is now discharging her duties as acting sister in the military wards. She has always been very assiduous in her attention upon patients, and is very popular with the whole of the staff.

Miss DAVIES is a lady who during her service as a nurse at various institutions has earned a high reputation for skill, assiduity, and kindness. She was formerly lady superintendent of the Hahnemann Hospital, Hope St, Liverpool. She was also associated in a high capacity with the first Western General Hospital, Fazakerley. She is now in charge of the Wallasey Military Hospital, Town Hall, Seacombe. She at one time held a leading position in the local Territorial Forces.

Miss WRIGHT has done devoted service in connection with the Military Hospital, Alder Hey, Knotty Ash, Liverpool, where she is sister in charge of the officer’s ward. She belongs to Birkenhead, and received her training in the Birkenhead Union Infirmary. She has been much commended by the medical staff and patients for her skill and attention.

Miss SCOTT is matron of the Mill Rd, Auxiliary Military Hospital, Liverpool. She first joined the service of the West Derby Guardians on March 9th 1908, as assistant matron at Mill Rd, and was promoted matron the same year.. She is a native of Manchester, and gained valuable experience at Bury and Bolton Infirmaries. Miss SCOTT is highly spoken of by the medical staff and has a great reputation among the patients.

Other Liverpool nurses who receive 2nd class Red Cross Medals are Misses JONES, PEARSON, ANDERSON, CHERRY and CROOK. They are on the staff of the Western General Hospital, Fazakerley.

Miss BUNFIELD who has been awarded the 1st class medal of the Red Cross Society is matron of the Lord Derby War Hospital, Winwick, Warrington. She was trained at St Bartholomews London, where she was secretary to the matron. After she obtained her certificate she went to visit friends in America and undertook the organisation of one or two hospitals in the States. She remained there for fifteen years and on her return to England she resided at Castel Norton, nr Malvern until the outbreak of war, when she went to France to work with the French Red Cross Society.

The following five other nurses now stationed at Warrington have been awarded the 2nd Medal of the Red Cross :-

Miss Sidney SMITH of Lee on Solent, near Southampton. She has been at Winwick Hospital since its conversion into a war hospital.

Miss KEMP, who belongs to the Australian Army Nursing Service, left Warrington yesterday to undertake work in France. Previously she had been engaged in Red Cross work in Egypt for a year. She had been at Warrington for about eight months.

Miss HARLEY [London] and Miss GILL [Cork] two other recipients have also been stationed at the Lord Derby War Hospital since its foundation.

The War Office has just issues a list of ladies whose names have been brought to the notice of the Secretary of State for War for valuable services rendered in connection with the war. Among these are the following :-

Miss J. C. HIRST, eldest daughter of Mr R. HIRST, formerly borough surveyor of Southport, has been awarded the Royal Red Cross Decoration. She is a member of the Q.A.I.M.N.S, and is now an acting sister at a military hospital at Frensham Hill, Farnham.

Distinctions won on the stricken fields

Miss Agnes BAGNALL, the matron of the Royal Southern Hospital, Liverpool, in her report to “The Hospital” of the work in her department during 1916, says the nursing staff number 80, a larger number than in 1915, owing to an increase in the beds. Of 20 probationers entered for training three left at the end of their trial month, and two subsequently without qualifying for a certificate. Of the remaining 15 nurses who received certificates, 6 left for military work, 3 were appointed sisters in the hospital, two entered for maternity training, 2 for private nursing, and the last of the 15 married. Miss L. E. JOLLY, matron, serving in France since the outbreak of war, has been awarded the Royal Red Cross. The same honour has been conferred upon Sister Mary EDWARDS and Nurse Mary CLARK who are both serving in France. Sister B. E. BARRETT, who went to Salonika in June 1916, has had the Croix de Guerre awarded to her by the French for bravery during an air raid, and Nurse CASSERLEY and CULLWICK have both been mention in despatches.

The King has been graciously pleased to award the Royal Red Cross Decoration to the under mentioned ladies of the Nursing Services in recognition of their valuable services in connection with the war :-

Among the ladies of the nursing service awarded the Royal Red Cross decoration 2nd class, in recognition of her valuable service with the armies in the field is, Miss Frances Ethel BACH, sister Civil Hospital Reserves, David Lewis Hospital, Liverpool.

The names of the under mentioned have been brought to the notice of the Secretary of State for War, for valuable nursing services rendered in connection with the war :-

Among the recipients of the King’s birthday honours is Miss Muriel Gladys HUUTON, of Moss Bank, Aughton, daughter of Mr W. L. HUTTON, J.P, proprietor of the Ormskirk Advertiser, who has been awarded the Royal Red Cross, 1st class. At the outbreak of war Miss HUTTON was on the nursing staff of the Royal Infirmary, Liverpool, and volunteered for the Q.A.R.N.N.S. For some time she was situated at Plymouth, and afterwards volunteered for hospital ship duty. For many months she moved backwards and forwards to the Dardanelles campaign, subsequently she was transferred to a Scotch naval base.

His Majesty the King has been graciously pleased to award the Royal Red Cross to the under mentioned ladies in recognition of their valuable nursing services in connection with the war :-

Miss Mary Elizabeth DICKINSON, A.R.R.C, matron, T.F.N.S, Wallasey Town Hall, Military Hospital and Birkenhead, is a native of Ashby de la Zunche, Leicestershire. She was trained at the Royal Infirmary, Liverpool, and acted as sister in that institution. She then became assistant matron at Bury Infirmary, and at the outbreak of war was called upon to be assistant matron at the Fazakerley Military Hospital. She was appointed matron at Wallasey in June last.

Miss Majorie Isabella HEPHERD is the eldest daughter of Mr James HEPHERD, J.P, of Heathfold, Grappenhall, Warrington. As a member of one of the Cheshire V.A.D, detachments she commenced work at the Raidon Court Red Cross, Hospital, Latchford in 1914, but for the past three years she has been engaged at the White Cross Military Hospital, Warrington. She was educated at Huyton College.