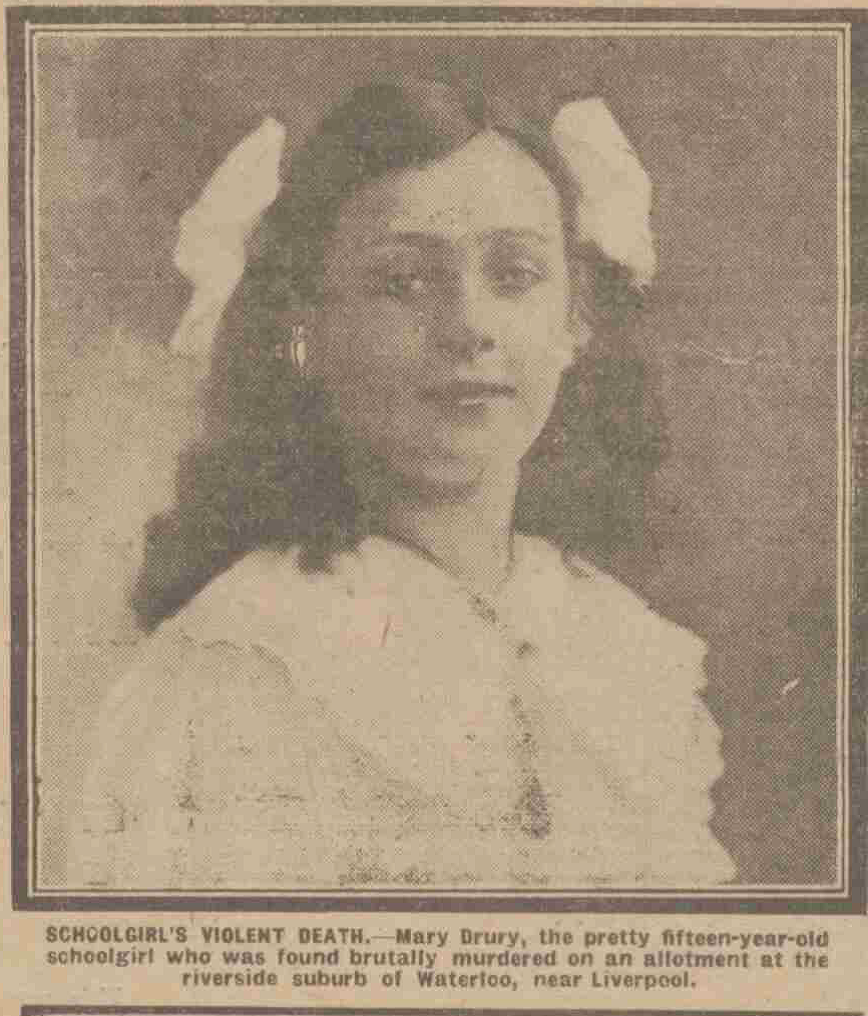 Mystery surrounds the murder of Mary DRURY. Her body was found on a waste piece of land adjoining allotments, some 300 yards from the nearest habitation. It lay in the hollow of a filled in ditch, shielded from the main Crosby road by a mound of earth.

When seen by a man on his way to work the sightless blue eyes looked up from a face distorted by terror, the dark bobbed hair was matted with blood, the mouth gagged by a man’s handkerchief, and the clothing was disarranged. Not only had the child’s head been battered but a jagged wound was visible in the throat, probably hacked by a pocket knife.

No weapon s have been found in the vicinity and the police have no material clue. The girl had suffered extreme violence.

Wearing a woollen tam-o-shanter and a mackintosh buckled with a belt she had left her home, not a quarter of an hour walk from where the body was found, shortly after 7pm. To her mother and brother she said she was calling on her school chum Isobel CONNELL of Park View which is in a stones throw of the scene, but earlier in the day she had told her schoolmistress she was going to visit an uncle at Crosby. As a matter of fact she did not arrive at either house and it is presumed she was attacked whilst in a lonely spot in Brook Road which would lead to either of the houses.

The body was cold when found, and in the opi8nion of the police life must have been extinct some hours. The assailant could have made his escape in many directions. The main road would take him to Crosby, where he could catch an electric train for Southport, Liverpool, or intermediate stations, or a tramcar, or he could have gone in the opposite direction to Blundellsands or Waterloo.

Nobody appears to have heard or witnessed any untoward incident in the neighbourhood, although a boy who visited the scene of the tragedy stated that in the darkness the previous night he saw a girl running across the ground chased by a man. More than that he would not say. This is one of the slight clues the police have to work upon.

The father of the victim Mr A. B. DRURY, a clerk, confessed that he knew no circumstances that would lead to such a crime. He said, Mary was a quiet girl, high spirited but of a contented disposition. She was of a retiring nature. Usually in bed by 9pm her absence from home on his return from work made him uneasy. He went to the house of her friend Isobel CONNELL of Park View, where it was understood she had gone because of her friend being absent from school. He then communicated with the police. He had an anxious night especially when he found she had not been to her uncles house in Crosby.

Mary had never complained of molestation, and he could throw not light on the tragedy, robbery could not have been a motive, she wore no jewellery and only carried a souvenir 1920 penny.

The schoolmistress of the Weslyan Schools where Mary was one of the most advanced scholars, confirmed the opinion of her father as Mary being a modest girl who set a good example to her schoolfellows. Mary had told her she was  going to visit her uncle Mr JONES of York Avenue Crosby, but subsequently learned from Mr JONES Mary did not call, but was not expected. He said she would have come the next day and with the family they intended to witness a dramatic entertainment at St Luke’s Church. She had lived with them a great deal and was like one of the family. He searched with her father until 4am. At one point they were within 15 yards of where the body was found, but discovered nothing.

The body lies in the Waterloo Mortuary, where a post mortem examination was conducted.

There are two definite clues that may be the means of solving the murder of Mary DRURY, the torn half of the man’s handkerchief found in the girl’s mouth and a cigarette-holder.

The post mortem examination tends to make the murder more baffling g inasmuch as the original theory has been found groundless. All footprints at the scene have been obliterated as many people have been at the spot.. The handkerchief with which the girl was gagged has no name of laundry mark. The plain bone cigarette holder picked up at the scene is in the hands of the police. Mr DRURY was asked if it belonged to him, or a friend, but he was unable to identify it.

There is no doubt the injuries to the head were inflicted with a heavy weapon with great violence, the wound in the throat was caused by a knife. The girl had not been violated.

The sandhills adjacent to the waste ground were scoured by the police without avail. A water-trough on the allotments was thoroughly examined by detectives looking for a weapon, rubbish on the bottom was removed and water drained off but nothing was found.

The Deputy Coroner and a jury visited the spot and the circumstances so far as was known described to them. The Chief Constable of the Lancashire County Constabulary, Mr H. P. P. LANE, together with Chief Superintendent GREGSON and Superintendent J. WILCOCK were present. Chief Detective Inspector FYLES took charge of the case.

The inquest was opened later and formal evidence of identification before the jury by the father of the girl, Mr A. B. DRURY. He stated he was a clerk employed by a meat company.

The Deputy Coroner thought it not desirable to state anything about the facts and having expressed his sympathy to the parents, adjourned the inquest till February 18th.

A development has occurred in the Mary DRURY murder. A young railwayman whom the police believe would have been able to give them important information which might have led to a clue was found dead on the line this morning [Friday Liverpool].

He lived at Great Crosby and his body was found near the Sandhills Station. He had been run over by a train.

Dramatic evidence was given today at the inquest of Kathleen Mary DRURY, THE 15 YR OLD DAUGHTER OF A Liverpool clerk who was brutally murdered on a public allotment at Waterloo, Liverpool on Feb 2nd.

The girl left home during the evening from Gordon Ave to call on a sick school friend and while crossing the allotments was waylaid and murdered her head being battered in and her throat cut. An all night search was made but the girl was not found until 8am the following morning by a man who was going to work.

The father described his all night search for the girl. He had not heard that his daughter lent 2s to Edward LEAHY of Crosby, who on Friday night following the tragedy was found dead on the railway near Sandhills. He said his daughter had bought War Saving certificates, with her pocket money.

Supt GREGSON of the Lancashire County Police, said that on Feb 4th, LEAHY admitted he knew Mary, who used to talk to him on the allotments. On the night of the murder he went for a walk at 7pm and returned an hour later. Witness examined his clothes and found blood on them, he also owned a clasp knife.

Dr SPILSBURY gave evidence that he found stains of human blood on the coat, and two human hairs found on the coat corresponded to specimens of the girl’s hair.

Isobel CONRAD school friend of the deceased spoke to her frequent meetings with LEAHY, and that LEAHY owed her 2s.

A woman named JONES stated that on the night of Feb 5th called at her home and stammered out ”I have been suspected, Witness said, “You were always kind to the little girl.” And he replied, “I did not even know her name until I saw it in the papers” Witness then said, “There are others suspected” and he replied despondently, ”Oh but they have taken my overcoat.”

The jury returned a verdict  that the girl was wilfully murdered by LEAHY.

Crime brought home to a signalman

The inquest on the body of Kathleen Mary DRURY, the 15 yr old schoolgirl found gagged and murdered near Victoria Park, on February 3rd was concluded yesterday

Police evidence was given as to an interview with Edward LEAHY, a railway signalman, who a few days after her death was found cut to pieces on the railway. LEAHY said to Superintendent GREGSON, who interviewed him, “You don’t suspect me?” The Superintendent replied you seem to have been seen in her company.”

The overcoat belonging to LEAHY was taken into possession by the police, and Dr SPILSBURY gave evidence that he found stains of human blood on the coat, and two human hairs found on the coat corresponded to specimens of the girl’s hair. The doctor added there were no signs of recent outrage.

Extracts referring to several matters were read from a diary kept by the dead girl. The jury found that the girl was murdered by LEAHY.

Suicide of signalman After murder

The Jury at the Liverpool inquest today found that Edward LEAHY committed suicide by throwing himself under an electric train. A verdict of murder against LEAHY was returned in connection with the death of Mary DRURY, a schoolgirl.