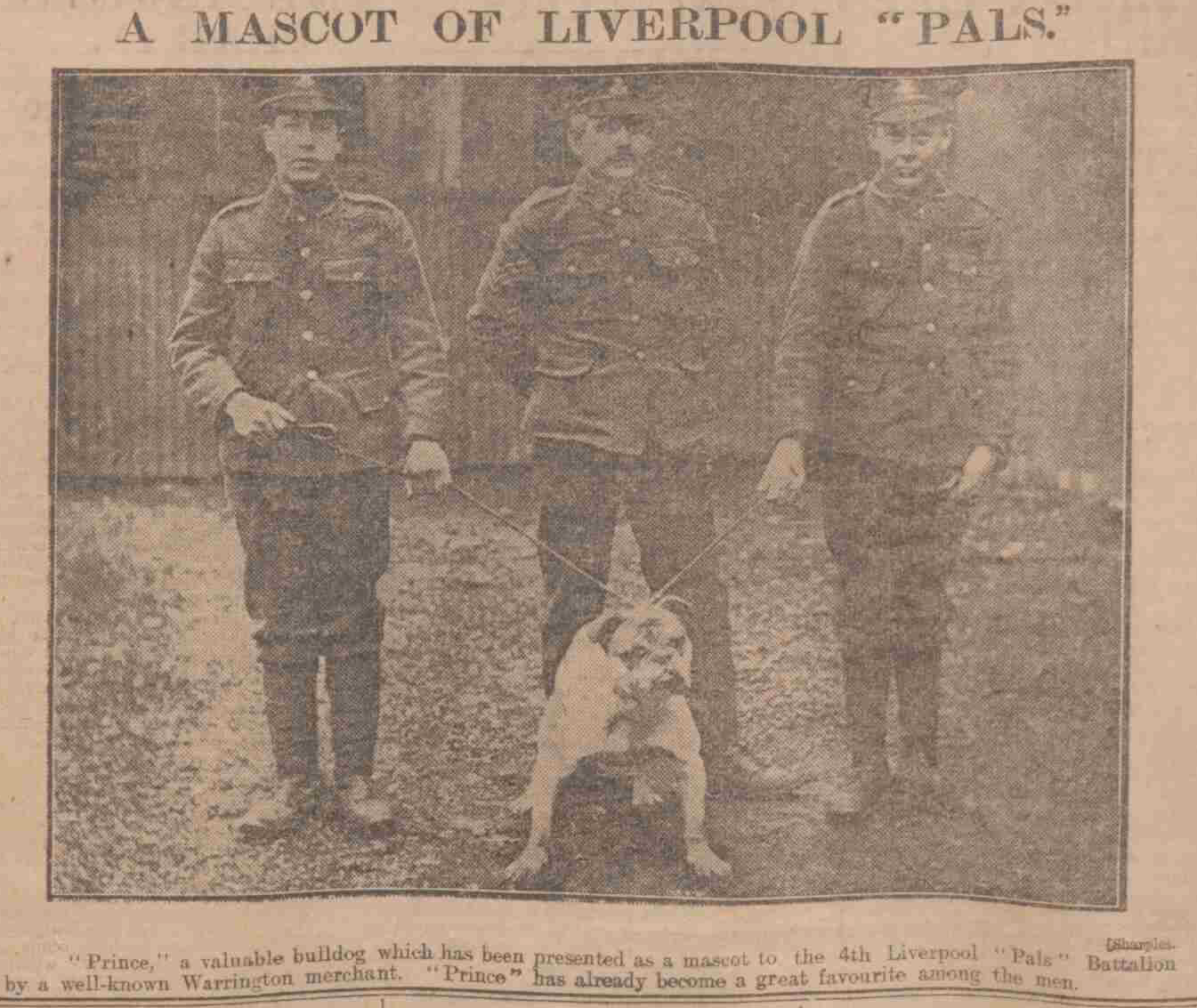 Recruiting for Lord Kitcheners Army is going on busily all over the country, and although the results are by no means consistently good many stirring reports come from different centres of population. A remarkable example of patriotism has been given by Liverpool. A couple of days ago it was suggested that Liverpool might form a battalion for Lord Kitcheners Army composed of men engaged in commercial circles, and in 36 hours, no fewer than 2,000 men have offered for service, thus there are two battalions already instead of the one asked for.

It was felt that men engaged in Liverpool Stock, Produce, Cotton, and other Exchanges would prefer to serve together rather than be spread among various regiments, and the idea caught on so well that when Lord Derby addressed the first meeting on Friday night 2000 men signified their readiness to go on active service.

There are many more willing to serve and yesterday Lord Derby received the following telegram from Lord Kitchener :-

"Splendid ! I congratulate you. Go ahead, Liverpool ! -" Kitchener.

The new force is to be known as " The Battalion of Pals" because all the men are engaged together in the commercial life of Liverpool. Major Stanley, D.S.O, Grenadier Guards, brother of Lord Derby, is to command the battalion, which will be officered as far as possible by the "pals" themselves. The men occupy all sorts of positions from clerks to heads of important businesses.

In addition Liverpool has already secured one battalion of 1,000 men to be added to the Liverpool Regiment, and a second battalion is in the course of formation.

Honour of the Liverpool "Pals"

In recognition of the splendid and arduous services rendered by Lord Derby in raising the three city battalions in Liverpool of the King's Liverpool Regiment, the King has given permission for the "Pals" to wear on their regimental badge the crest of the house of Stanley. Appreciating the honour Lord Derby has presented each man with the crest in silver, the Stanley crest was last borne in battle 250 years ago.

Private Patrick HOBAN, a Liverpool tobacconist, who enlisted in the 2nd Pal's Battalion of the King's Liverpool Regiment, and who had been training at Knowsley, was thrown off a motor waggon when on duty and died before reaching hospital. At an inquest held on Christmas Eve a verdict of accidental death was returned.

The following address was made by Sir John FRENCH to the 1st Battalion King's Liverpool Regiment a short time ago on their relief from trenches in the neighbourhood of Ypres :-

"Officers, non-commissioned officers and men of the King's Liverpool Regiment , - it gives me great pleasure to be able to come here today to see you. I wish to tell you how deeply I sympathise with you on the loss of your gallant colonel [Colonel BANNATYNE]. He died like the fine soldier he was at the head of his regiment for which he had done so much, leading you to success. You have lost a fine leader and we have lost a capable officer. His loss will be great.

I have come to congratulate you on the work your regiment has done. You bear on your colours names and records of battles in which your regiment has fought and distinguished itself. You have added to their list, and have worthily upheld the traditions and fame of your regiment. It is not the first time you have fought under me. In the South African War your battalion was at Belfast with me. It has been due to the splendid determination and fighting qualities of you British soldiers that we have been able to maintain our line against great odds. You have suffered great hardships and losses cheerfully. You never fail to keep your line. I congratulate you on the fine performance of your regiment."

The 1st Battalion the King's Liverpool Regiment which has seen very heavy service at the front since the early days of the war, has received several complimentary messages. On the 14th instant, General CLIVE, the Colonel of the regiment wrote :-

"General MUNRO, commanding the Division, Army Corps, spoke most highly of the King's. No battalion kept up their smartness better, and the day after relief out of the trenches they would be clean-shaven and putties well put on, standing to attention and saluting smartly."

A report received from Brigade Headquarters on the same date included the following :-

"In the recent railway accident on the way to -------, Company Sergeant Major F. LAVERY, 1st Battalion, the King's Liverpool Regiment, was specially noticed for getting to work and rendering efficient aid in rescuing the wounded and organising parties. The Commanding Officer is very glad to bring to the notice of all ranks the credit reflected on the regiment by the initiative and level-headedness shown by this non-commissioned officer."

The following message was received by the Commanding Officer of the regiment on November 3rd, from the Divisional Commander :-

"Your reports of the steadfastness with which your splendid battalion are holding their ground give us all the greatest confidence. Please tell them I am assured they will hold their own against any odds."

A particularly interesting order is that issued by Brigadier General DAVIES to the regiment on September 23rd :-

"On relinquishing the command of the ---- Infantry Brigade to take up another appointment, I wish to convey to the officers and men my heartfelt thanks for all the assistance they have given me both in peace and war. I cannot speak too highly of the conduct of all ranks during the strenuous days and nights which have passed since the commencement of hostilities. Their behaviour and bearing have been the admiration of all those who have been in a position to notice them. I can safely say that I am handing over the command of officers and men who will never disappoint my successor in whatever anxious task he may have to give them."

The following orders from the Divisional Commander serves fittingly to terminate those fine tributes :-

"In every detail your regiment has done magnificently, whether in the field on parade, on fatigue, or as orderlies. Everybody who comes in is saying the same thing. Tell them from me they ought to be proud of themselves."

56 men of the Liverpool Regiment reported wounded under dates Jan 2nd and 3rd,

Private Pirie of the 7th King’s Liverpool Regiment, in letter from the trenches to his parents, in Birkdale, says “While I am writing the enemy's shells are exploding 1,000 yards away, but I have got used to them now that feel almost safe here at home. I have been looking through the periscope, but all I could see was a lot of dead in front of the German trenches it is pitiful to see them. The Germans will not bury their dead nor will they allow us to do so, they have to remain and rot.

Losses in the Dardanelles, killed Captain A. L. RADFORD, 8th Batt Lancashire Fusiliers, T.F, [attached] was formerly a captain in the 9th Bat King's Liverpool Regiment, with headquarters at Everton Rd, Liverpool. Early in the war he went abroad with a draft, and was eventually posted to the Salford Battalion, he was promoted to captain in the King's Liverpool Regiment in December 1907.

An episode of a tussle

A member of the "Pals" in letter to his home in Liverpool says:-

Old soldiers who have been in action all over the line say our last engagement was the hottest action they have been in. The enemy sent over a lot of tear-shells and gas as we went up. It is horrid stuff and we had to wear our gas helmets.

We went over the top at 4.15am and advanced on the Germans. There was a very heavy mist, and we could not see more than 20 yards in front of us. We could not see the enemy, but their machine-guns were absolutely raining bullets on us, and it was so hot that we had to creep from shell-hole to shell-hole as we went on. We crossed two German trenches and found them piled up with dead.

All the time one of my best pals was keeping close to me, when I suddenly missed him. Then I heard somebody call out my name, and I looked round and found him with a gaping wound in his neck and his shoulder bone broken. I must say that I cried like a kid, as I thought he was gone. However, I bandaged him up, and with the help of his brother, who was also with us, carried him back to the German trench, where it was more safe for him than the open.

After I had made him as comfortable as I could, I went on after the boys, and shortly afterwards got a bit of shrapnel in my hand, so I went back and found my pal, where I had left him, and I took him behind the line to the dressing station, where I left him in good hands.

IN MEMORY OF FALLEN "PALS".

The service to be held at St. Nicholas's Church, Liverpool, at noon on the 24th inst, when the bishop will preach and the Lord Mayor will attend in State, is in memory of the "Pals" of the four city battalions who have fallen.