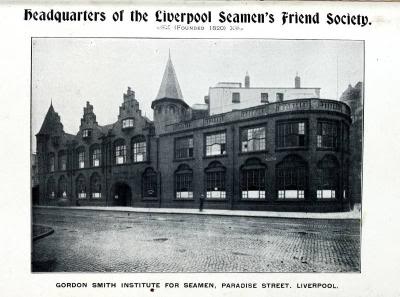 How Sailors spend their leisure hours!

A visit to the Gordon SMITH Institute

"The sailors of Liverpool have lost a good friend now that Mr Samuel SMITH is no more." Was the sympathetic remark of one who has devoted very many years to the excellent work carried on among seamen by various organisations in this city.

I realised the truth and the deep meaning of that statement when I visited the Gordon SMITH Institute for seamen, the gift of Mr Samuel SMITH in memory of his only son, Mr James Gordon SMITH, who was much interested in sailors and at the time of his death was honorary secretary to the Liverpool branch of the Navy League.

The institute, which has a garden roof, much appreciated in summer, is situated in Paradise St, in the heart of the sailor's rendezvous, and its usefulness as the headquarters of the Liverpool Seamen's Friendly Society cannot be over-estimated. It is a magnificent structure, its interior is as complete and comfortable as its exterior is attractive and imposing. It cost £8,000 and stands today not only as a memorial to a worthy son but as a memento, which will serve to perpetuate the influence of a good father and philanthropist.

It was the first week of the year, as the festivities were not over the various rooms were still decorated with holly and mistletoe. I was hardly well inside the place when the sound of music struck upon my ears, and in response to an inquiring look, Mr Robert CLARK, the energetic and kindly deputy-supervisor informed me a musical service was going on in the general-room.

Have you ever, heard sailors sing? It is a treat that inspires and heartens you. Sometimes you catch a snatch of their singing when they are heaving the anchor of some ship, as you cross the river on the ferry.

Just hear them when taking part in a service, and you will agree they don't do it in a half-hearted way. They throw vigour and life into it, they can't help it, they, are built that way.

I gazed at the gathering and was struck with the happy, contented looks on the bronzed faces and pondered on the "well dones" that would one day be the reward of those who bestowed such loving care on those "who go down to the sea in ships and do business on great waters."

Mr CLARK pointed out to me the cosy rooms for reading and the places of recreation for, Captains, Officers and men, and we conversed on the excellent work that society has been doing for the seamen for the past eighty years. It has kept pace with the times and the growth of the port and the days are far back when it had to regulate its operations from small rooms in Wapping, Park Lane, and the Mariner's Parade.

The building of the Gordon Institute in no small degree, centralised its efforts, and here, as also in the South-end Bethel, in Grafton St, a work is being accomplished among the sea-faring community, which it is impossible to do more than outline now.

The Rev James M. WILKIE is the devoted Superintendent and he is loyally supported by Mr CLARKE, and four other missionaries, all of whom are "old tars". One of them is Capt Thomas TRANTOR, who has been connected to the Seaman's Friendly Society for nearly 40 years and is believed to be the oldest seaman's missionary in the world. As I chatted with him and enjoyed his bright and happy conversation, I could hardly credit that he had already passed the allotted span of man's life, he was full of stories and reminiscences.

He knew everything about the society, its endeavours to promote the religious and social welfare of the seamen, ashore and afloat, its beneficial influence in sailor's lodging-houses, on the dock quays, in the Sailor's Home and else where. Its successful efforts to carry on Sunday schools for the children of seamen in the South-end of the city, and of the support it had received in connection with its Good Templar Lodge, its savings bank etc.

"Come into the Fos'csle" said Mr CLARKE. I did, and found myself in a jolly company of Jack Tars, smoking and enjoying in the warmth and comfort of a fine room, which went by the familiar title "Fos'csle. Here the men find all the advantages of a social club, and, judging by the number, who were writing to , brothers, sisters, or somebody else's sisters, they appreciate those benefits.

I must pass on. Imagine you look into a large hall, as it appeared to me the other evening, when, in the presence of an audience that packed every corner, " ship was launched." The cargo of which consisted of all sorts of good things, mufflers, wristlets, helmets, gloves and underclothing, which, were distributed among those present. It was a fine sight! But only one of many similar that from time to time are seen here.

It was from the Ladies Committee and the Ladies Guild that the "presentation launch", originated and it was the president of the committee, Lady PETRIE, who "christened the ship."

It is the ladies also who periodically arrange an "At Home" for the stewardesses in the comfortably furnished room, specially set apart for those useful lady officers on board ship.

There are Thursday evening concerts, lectures and lantern exhibitions that are given here.

I also spent some time in the library, the literature was inviting and the selection of books good, the novel as much in evidence as the heavy class of reading. Without charge the department also regularly supplies ships with small libraries, handy cases containing 25 to 30 books are despatched, enabling ship's crews to good literature while at sea. If further development is curtailed through lack of funds and books, think of the institute when rearranging your library.

There may be a good deal of monotony about Jack's life when at sea, but he knows nothing about monotony once he attaches himself to the institute, which he may do free of cost.

All are welcome, British, German, Scandinavian and Spanish, their taste considered so carefully that even the rooms for the Spanish are coloured white and yellow, their favourite tints.

The baggage-room is much appreciated, here sailors can leave their bags and chests with confidence, knowing that they will be in safe keeping.

I enjoyed my visit and would have liked to have remained longer, but time pressed, and as I stood at the bottom of the main staircase, I gazed back at the portrait of the late Samuel SMITH and of his son, and read once more the large brass tablet hanging close to the portraits;-

"This institute has been erected by Samuel SMITH Esq. M.P, in affectionate remembrance of his son Mr James Gordon SMITH, and was opened on Monday, Nov 28th 1900."