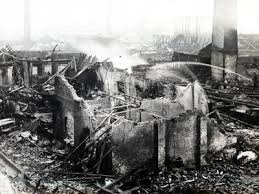 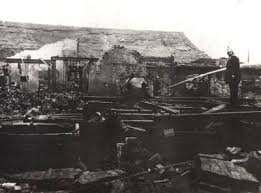 MANY PERSONS INJURED AND GREAT DAMAGE TO PROPERTY

About 25 mins past ten yesterday morning a terrific explosion, which resulted in the breaking of thousands of windows and great injury to life, occurred at St Helens.

It appears at a quarter past ten a chlorate house at Messers KURTZ'S Chemical Works, belonging to the United Alkali Works, took fire, and the flames flared up with a terrific force, and caused some huge boilers close by to explode.

The explosion was of great force, causing great devastation throughout the works, shaking the whole town by the earthquake.

The explosion was of such violence that it completely wrecked KURTZ'S Works, part of the Hardshaw Brook Chemical Works, blew off the roof of the Liverpool and Hull Red Oxide Works, did a great deal of damage to the Corporation Gasworks, and blew up all the vitriol chambers at the Hardshaw Brook Works into Peasley Cross Lane, completely stopping the road.

At KURTZ'S Works the scene of the explosion, everything was blown to pieces, railway wagons and huge stones being blown to pieces. At this place a number of lives were lost.

Mr Fred FARAM [spelling changes futher in article] an old and respected resident of the town, who was for a number of years connected with Messers GAMBLE'S Chemical Works, was killed on the spot. Another man, whose name is said to be DUFFY, was blown out of the works into Langtree St, having fallen about 50ft, and was instantly killed.

At the gasworks a young man had all his clothes burnt off him by the gas.

At Hardshaw Brook Chemical Works four men were seriously burnt, one of whom, William CARMAN of Wilcox St received injuries to the head. Two others were taken to the Providence Hospital.

A woman walking along the street had her hair and face burnt by the gas. All over the town people are suffering from cuts caused by the falling glass.

The explosion was as a result of about 60 or 70 tons of chlorate becoming ignited by the fire, which originated in the chlorate house.

Two people in the houses at Peasley Cross, where the explosion took place, had many narrow escapes. Seven or eight people were admitted to St Helens Hospital. The greatest confusion prevailed for some time at this institution, which stands in an exposed position, all the windows of which were blown into the wards. The greatest consternation was caused throughout the town, and people began to flock to the scene of the accident from all parts of the district. Peasley Cross was nearly isolated from the rest of the town by reason of the dangerous gases which filled all the approaches to the part of the town and issued from the sewers in all directions.

Shortly after noon the streets of St Helens presented a terrible scene of excitement, people marching backwards and forwards in big crowds as if they didn't know what to do with themselves. The roofs of some of the schools have been taken off, and some of the children injured. A large window in St Helens Parish Church has been blown in.

In a general survey around the principal scene of the disaster the sight was one not easily forgotten. It was one of destruction in its worst form. Scores of houses mostly inhabited by the workers in the district, had been more or less wrecked, the windows scattered, the roofs taken off, and the walls completely broken. The insides of the houses show more or less the results of the destroying forces which had been at work, and which had momentarily changed what was a hive of industry, to a scene of ruin.

In Peasley Cross Lane, which is close to where the explosion occurred, more destruction was caused than anywhere else in the town. The district is thickly populated by the working classes employed in the works round about, and the women and children who were for a time watching the fire burning in the chlorate house from the roadways and banks were fortunately saved from the falling debris, consequent on the explosion. Had they been in their homes, the destruction of life and limb would have been much heavier than we have had to record, as had they been inside their houses nothing would have saved them from being killed or badly maimed.

For instance the shop in Peasley Cross Lane of MR SHEFFIELD who keeps provision stores, and also has the local post office has been destroyed from cellar to roof, and there was not a single part of the building that was not affected. His front windows of the shop had been blown in, and the whole of the stock-in-trade had been destroyed, or nearly so, his back sitting-room, in which there was a piano and other furniture was more or less destroyed, the beds and furniture were lying under heaps of debris, and holes were made in the roof.

In Alma Place, 280 yds away from the explosion, Mrs ROWLAND was standing outside with a neighbour watching the fire, when she was struck on the head with a piece of timber from the chlorate house. The unfortunate woman was rendered unconscious, and was taken to the infirmary and remains in a critical state.

The gasworks have had an extraordinary escape. The Manager said his attention was called to the smoke in the KURTZ'S Works, and knowing the danger he took whatever steps possible. The men in the gasworks remained cool and courageous, although the whole works shook with the explosion. The most serious damage was done to one of two gasholders, on which burning timber alighted. A huge rent was made into the top of one of the gasometers, but no explosion occurred, the gas taking fire and shooting flames to a tremendous height. The gasometer sank down into the tank. When it burnt it contained 250,000 cubic ft of gas. The other gasometer was practically uninjured, and the purifying-house sustained little damage. An explosion in the purifying-house would have been highly dangerous. The Governing-house and the Caretaker's cottage are completely wrecked internally.

What makes the explosion extraordinary is that it has been discovered the boilers were intact, while it is curious that although the adjoining buildings are blown to pieces the huge chimney near the chlorate-house still stands.

A little boy working at the scene of the explosion at the time in the joiner's shop is missing, it is not known if other men than those mentioned have been injured.

The explosion reached Sutton, a mile away, Prescot and Haydock, 4 miles away, windows were smashed, hundreds of people rushing to St Helens to see the cause of the damage.

The killed and injured

Mr CAREY, Secretary of the United Alkali Co, deploring on behalf of the directors of the catastrophe, stated at 5pm yesterday that the company had been informed of 4 deaths, and that 17 persons had been taken to Hospital.

The bodies of FARHAM and DUFFY were removed to the mortuary, DUFFY'S head being almost blown off.

William GIBSON, a workman at the Hardshaw Brook, serious external and internal injuries - not expected to live many hours.

Daniel MARR of 77 Bolton St - severe burns, from the gasworks

A girl named JOHNSON of Union St was lying ill at the house, and had to be removed to hospital when the roof of the house blew off.

William BICKLE, aged 19, employed at the gasworks - compound fracture of the right arm and bruises

William WILSON, employed at the gasworks, a youth of 16 is badly burned about the body, arm and leg, he lives at 32 Warrington St.

Samuel MARR, 46, Bolton St, is burned on the face and arm.

INQUEST AND FUNERAL OF THE VICTIMS

The full effects of the terrible explosion at St Helens on Friday week resulting in the loss of five lives, the infliction of injuries, more or less severe, upon scores of persons, and the destruction of property to an enormous extent throughout the town, were not fully apparent to the townspeople generally until Saturday when the naturally intense alarm and excitement into which they had been thrown by the appalling events the previous day had somewhat subsided.

The general appearance of St Helens on Saturday, when heavy rain fell for the greater part of the day and night was truly distressing. The havoc wrought by the terrible explosion was there in all its grim reality, and early visitors to the town were astounded at its wrecked and dilapidated aspect.

The roadways bore many traces of the devastating effects of the explosion particularly in the Peasley Cross district, where whole rows of houses had been left without a single pane of glass and in many cases the buildings were roofless and tottering on their foundations.

Tremendous interest throughout the country by the terrible explosion was made plain on Sunday, when many more visitors entered the town than any other day in its history.

The trains arriving at the station were crowded with passengers, many who indicated their visit to the town was one of sight-seeing and at noon and early afternoon every train was packed from end to end.

Cyclists there were by the hundreds, and traps, waggonets, omnibuses and vehicles of every size and description followed each other in rapid succession during the afternoon. At night the trams of the St Helens and District Tramway Company were crowded from Prescot and Haydock and other outskirts of the borough.

The poor people occupying the wrecked cottages opened their doors and invited inspection of their premises, thousands availed themselves of the opportunity to see the havoc caused internally.

On the walls of many houses the tenants had scrawled such intimations as, "Anyone can come inside and see the ruins," and "A little assistance thankfully received."

Another, "A little assistance kindly received, the goods of the poor people is destroyed."

Colonel FORD, Chief explosives inspector for the Home Office, made an inspection of the scene of the disaster on Sunday, and interviewed Mr BRIGHOUSE the County Coroner. Col FORD stated that if necessary he would bring Mr DUPRE, analytical expert to attend the full inquiry.

On Monday Mr BRIGHOUSE held an inquest at the Town Hall on the deaths of the five men who died due to the terrible explosion.

The jury were informed of their duty and Mr BRIGHOUSE sympathised with the families of the dead and injured. He also gave evidence of the case and the necessary orders for the interment of the deceased. The inquiry was then adjourned until Tuesday the 30th inst. The Jury was bound over to attend the resumed sitting.

The interments of the four victims of KURTZ'S Chemical Works took place at St Helens cemetery on Tuesday afternoon. The bodies those of, Thomas DUFFY, James GREY, William GIBSON and Richard SWIFT.

In connection with the funeral of DUFFY and GREY, their bodies were removed to Holy Cross Catholic Church and placed before the altar, preparatory to a special service held there during the forenoon. Both were members of the Men's Society at the church.

The remains of SWIFT were interred in the Church of England part of the cemetery and the Rev J. M. COURTENAY, Vicar of Parr, officiated.