Everton thanks to the munificence of the David LEWIS Trustees, may expect to enter, at no distant date, into possession of the Rupert Lane Barracks site as a place of popular recreation.

Some preliminaries have still to be settled, but Mr Benn Wolfe LEVY, elected one of the honorary freemen of Liverpool in 1901, on his completion of the David LEWIS Hospital, and since author of the David LEWIS, Workmen's Hostel and Club, is not a man given to avoidable delay.

He covenanted to acquire the Rupert Lane Barracks at the expiration of the Governments tenure, and has an ernest wish to see the best use of the property for public open-air enjoyment.

Rupert Lane Barracks has interesting associations, but the plot of green which remains in the barracks square is almost the sole remnant of the rural Everton whose memories many old inhabitants of Liverpool cherish.

In the history of the city, Rupert Lane supplies a memorable chapter. At the Royalist Siege of Liverpool and the capture of the castle in June 1644, Prince Rupert took up his headquarters in a cottage in Rupert Lane hard by the barracks of much later date.

The cottage stood for 200yrs after Rupert's occupancy and was demolished in 1845. Meanwhile, Everton had begun rapidly to lose its sylvan beauties. 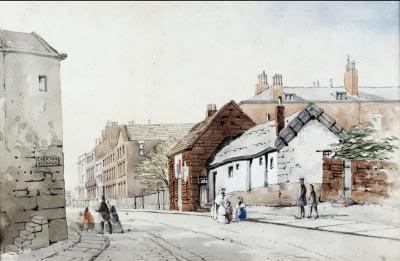 The site of the old Rupert Lane Barracks, in part demolished and of Rupert Grove, a narrow street composed of cottages was, in 1790, together with some adjacent land, the property of William HARPER. In that year Mr HARPER erected what a local historian described as, "a noble mansion," and, on the same authority the whole of the grounds and accessories were laid out, "in a style of Princely magnificence." Mr HARPER had doubtless an eye to the future, for he was elected Mayor of Liverpool in 1804.

His wealth increased, and, setting an example since largely followed, he retired to Cheshire. He died in 1815 the year of the Battle of Waterloo.

The Rupert Lane Mansion had meanwhile passed into the possession of the holder of another honoured Liverpool name, Charles SHAND. Mr SHAND himself resided in the house, and its then commanding position and unobstructed view will be gathered from the fact that an observatory was erected in the vicinity in order to signal the appearance of inward bound vessels off the port.

Rupert Lane was not the first barracks site on Everton slopes at the beginning of the 19th century, Prince WILLIAM [afterwards WILLIAM 1V] was the resident military commander of the district, and for a few years St Domingo House was converted into a barracks, the fort withdrew the troops, which where transferred to Seaforth 20yrs ago.

Prince Rupert, we may add, after whom the barracks was called, was the nephew of Charles 1, and an impetuous leader of cavalry. In 1648 he was recalled from abroad and appointed to the command of the Royal Fleet, but eventually in 1651, the great parliamentarian, Admiral BLAKE, attacked the Prince's squadron, and burned or sank most of his ships. He died in 1682.