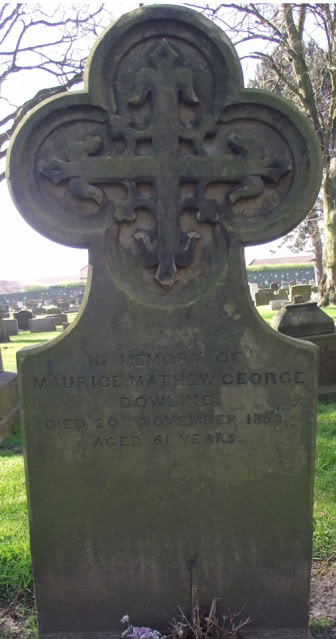 On Sunday morning last Mr Matthew Maurice George DOWLING, for many years connected with the police force of this town, expired at his residence, Wavetree, in his 65th year. He had latterly had several attacks of paralysis, which destroyed the use of one side, and almost deprived him of his sight and the power of speech. Deceased entered as a boy in the government service, on board one of Her, Majesty's gun-boats, and was employed for some time in Gibraltar. In 1803 he was at the taking of Bastia in Sicily, under Admiral NELSON, and discharged his duties in a manner to call forth the commendations of his superior officers. The siege was considered one of the most important events in the life of the immortal NELSON, being the only occasion in which he conducted hostilities on shore. Mr DOWLING was afterwards engaged in the naval service on the coast of Sicily and Calabria, and was present at the siege of Gaeta. He subsequently served in Spain, where he was employed in the Commissariat department, and on his return to England was appointed in an official capacity to assist in paying the Chelsea Hospital pensioners. He also became one of the gentlemen-at-arms or what are commonly known as the gentlemen pensioners and was for some time in immediate attendance on their late Majesties George 1V and William 1V, but on coming to Liverpool he sold his commission for £1350.

Many years ago he was employed in an important investigation in Ireland. It appears that representations had been made to the government that numbers of men were in the receipt of pensions who had no legal claim on account of services rendered to their country. The parties legitimately entitled to the pensions being dead, certain persons personated them, and so received their pensions, thus committing a most serious fraud upon the government. Mr DOWLING was one of the officers sent over to Ireland to make inquiry and expose those frauds, and was most successful in the execution of this delicate and difficulty commission.

Through the Marquis of Wellesley, Mr DOWLING received an introduction to the then secretary of state, Sir Robert PEEL, who availed himself of his services in organising the metropolitan police force and drawing up the book of instruction. This led to his appointment as one of the superintendents of the metropolitan police, and while so engaged he was sent by government to direct a body of men employed in suppressing the alarming and serious riots which occurred about that period at Bristol. Mr DOWING was appointed in 1833 to the command of the Liverpool dock-police force, which body he was the means of organising. It is said that the present Earl of HARROWBY, when Lord Sandown, was instrumental in promoting Mr DOWING's introduction to the Liverpool dock-police force, his Lordship having been made acquainted with an occurrence in which he exerted himself most successfully in the discharge of his duties.

In 1838 when the dock and town forces were amalgamated, Mr WHITTY was chosen to fill the office of Head Constable, and the appointment of a person to discharge the duties of commissioner of police became necessary. To this office Mr DOWLING was appointed and held it till 1844. In that year in consequence of the resignation of Mr WHITTY, the situation of head constable became vacant. Mr MILLER succeeded Mr WHITTY as head constable, but on the retirement of Mr MILLER, who held the office for only a few months, Mr DOWLING received the appointment. He held this situation until February 1852, when he resigned under circumstances which the public are familiar. He was subsequently upon an application to the town council, placed in the situation superintendent of the chain cable testing machine, at the west side of the King's Dock, which office he held up to the time of his death.

In his position as commissioner of police Mr DOWLING was in communication with the government from time to time, and afforded information on various matters of local as well as general interest. A special vote of thanks was given to him by the magistrates of this borough for his conduct on the occasion of the anticipated riots in 1848. He was well skilled in several of the modern languages, and this knowledge he frequently made available in cases which came before the magistrates requiring the aid of an interpreter. He was also a man of literary talent, being the author of several dramatic works, poems, songs, and other compositions.

Mr DOWING was cousin to the late Sir James DOWLING, who a few years ago went out as chief judge to the colony of Sydney. Another cousin Mr Sergeant DOWLING occupies the position of judge of one of the county courts. The remains of the deceased will be interred tomorrow [Wednesday]

Funeral of the late Mr DOWLING

On Wednesday last the remains of the late M. M. G. DOWLING, were consigned to their resting place in the churchyard at Roby. The funeral cortege left the house of the deceased at Broadgreen, about 10am. Amongst those present were Mr E. BANNER, the deceased's son-in-law, Mr CORFE, Mr J. MAWDLSEY, Mr TROUTBECK, and two nephews of the deceased, also Mr Superintendent RIDE, Mr Superintendent QUICK, and Mr COWAN, chief clerk to the police office. The parties proceeded to the church in two mourning coaches, following the hearse. The funeral service was read by Rev G. BANNER, incumbent of Roby Church. After the funeral those present partook of some refreshment at the house of Mr E. BANNER, of Roby, and returned to town by railway.