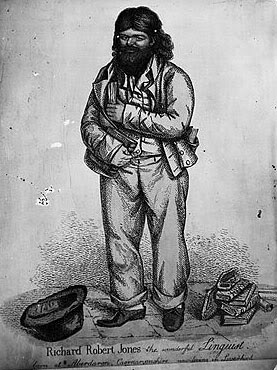 In our last we omitted to notice a remarkable visitor to our Eisteddfod, who was entitled to our particular notice. This is no other than the celebrated Richard Robert JONES, much better known as the cognomen of Dick Aberdaron the noted linguist. The personal appearance of this eccentric character is most disgusting and offensive. He wears a long black beard, pendant over his breast, the undisturbed growth of many years, which induces the persuasion that he is a descendant of Israel, the upper portion of his face that is discernible, differs but little in colour from the mosaic past, it being filthy in the extreme and almost as black. His hands resemble in colour the back part of a sole. His garments are a counterpart of his person, wearing a long threadbare great coat, a ragged waistcoat, with the remnant of one or two buttons, which expose to view a nasty rag, which may once have been white, and is still intended to represent a shirt, with a neck-cloth corresponding in colour and value. His hat and lower garments are in keeping with the rest of his attire. It is a fact, that this entire negligence of his person and dress has been remarked from his youth and he is now in the 51st year of his age.

He is the son of a sawyer in humble circumstances, was born at Aberdaron in Carnarvonshire, and in very early life imbibed an inveterate inclination for the acquirement of languages, and has always been considered, an original self taught prodigy. He has obtained a tolerable knowledge of the Hebrew and Greek, the characters of which he writes with correctness and even elegance. He likewise understands the Chaldee, Arabic, Persian, and is still better versed in Latin, French and Italian. He has also appeared as an author. Among his labours may be numbered a Greek and Latin lexicon, which says his biographer, [the late Mr ROSCOE of Liverpool] with a few corrections might be a useful work. He has also written a collection of Hebrew extracts, to which he has added a vocabulary in Hebrew and English, and a Latin Treatise on the music and accents of the Hebrew tongue. He at one time procured a Hebrew Grammar, and finding it deficient in directions as to the points, he complied another, supplying that desideratum, producing a work consequently very different from the other. Another work on the same subject followed this, and he has stated it as his opinion on the disputed question of vowel points, that Hebrew without points is like a harp without strings. Some years ago a friend gave him a Welsh harp, which he repaired with some ingenuity, he has now two of those instruments, and occasionally carries one of them with him, accompanying his attempt to sing some of the psalms in the original, in the manner, says Mr ROSCOE, not altogether unpleasing. The late Mr ROSCOE was his zealous patron, and the son of that gentleman at present gives him an allowance 6s a week, arising from a collection by his friends of which the interest furnishes this amount.

The usual residence of this extraordinary man is in Midgehall Street, Liverpool. The sole business of Dick Aberdaron to the Eisteddfod was to exhibit a Hebrew and Greek MS, written by himself, on the three orders of the ancient harp, but as this formed no subject for competition, there was no prize for Dick. He was, however, rewarded by the liberality of the Committee.

Dec 18th at St Asaph, aged 63, Richard Robert JONES, better known in the principality as Dick of Aberdaron, the celebrated Welsh linguist. He was well known to the generality of the Liverpool public from the peculiarities of his general appearance, but more favourably in the literary portion of it, and of England in general, by the extent of his acquirements in the ancient and modern languages. He was fortunate in having for the chronicler of a certain portion of his life, of his attainments and his peculiarities, the author of the life of Lorenzo de Medicis, whose biographical sketch of him will now be referred to with much interest.

The Carnarvon Herald gives the following particulars respecting this individual, whose decease was mentioned in our last.

This extraordinary linguist ended his earthly erratic career at St Asaph on Monday last and was buried in the churchyard of that city on Thursday, the clergy, with the principal inhabitants paying homage to his acquirements by forming a funeral procession to escort his body to its resting place, and on which, we understand a tablet is to be laid by his friends and patrons to point out the spot where, Dic y Leithoedd has been interred out of the reach of all tongues. We understand that a cast of the head and features of this singular individual has been taken by Mr Craft ROBERTS, surgeon of Holywell, a model of which will be a study to the curious in phrenology and physiognomy. It is rather a curious fact that Dick's extraordinary talents were first noticed and fostered by the late Dr CLEAVER, while Bishop of Bangor, and that his last days should be comforted by his equally benevolent son Rev William CLEAVER of St Asaph.

Poor Dick to whom these posthumous honours were, was, as most of our town readers are aware, a beggar in Liverpool for many years.

We are indebted to a valued correspondent, whose recollection of incidents belonging to bygone times has served to enrich these pages, for the following interesting account of the early days of a highly gifted, but eccentric character :-

I noticed in your obituary of last week the decease of Richard JONES, the Welsh linguist, and of whose early literary history the following reminiscences may not be uninteresting to some of your readers.

His father sailed a small craft called an Enlly Boat, which usually traded between Carnarvonshire and Liverpool. While the boat was, in the year 1812, on her trip, she remained a tide at Garth, and this gave Richard JONES, alias Dick Aberdaron, an opportunity of visiting Bangor School. No sooner had Dick come within the playground, than the oddity of his person attracted the notice of the boys, and when he enquired for some classical authors, either for sale, or in exchange for books he had with him, he was asked by some of the higher boys what he wanted with them. He answered very tersely, to peruse them. He was taken to school, and William ELLIS, [afterwards curate of Aber} opened a Greek Testament, and asked Dick to read a verse or two. The boys, all crowding round and on the forms, were much amused by the peculiar accent, and the "ore rotundo" with which he pronounced the gutturals. He was next asked to construe what he had read, and this he did off hand. Then came the tug of war and this "Dyn Aberdaron" came off victoriously, for he satisfied William ELLIS, then a young man, on the eve of leaving School for College, that he well understood the principles of Grammar. Mr ELLIS who had been a pupil of the late Dr WILLIAMS, of Llanbedrog was well versed in Greek, and particularly in Greek Etymology, which was a strong feature in the Doctor's teaching, and herein also Dick was quite at home. The result of this examination caused quite a sensation among the boys and the love of funning changed to a hearty feeling of good will towards Dick. Having had some old books he made for his little bark.

The second master, Mr DAVIES was not only [as is said] the milk, but the very cream of human kindness, was much interested with the account the boys gave him of Dick, and regretted he had not seen him.

Richard JONES, however, never lost an opportunity of calling at Friars school on his middle passage to Liverpool, and he was greatly noticed by Mr DAVIES, Dr CLEAVER [then Bishop of Bangor] the late Mr WILLIAMS of Treffos and others. Many a severe thrashing did poor Dick receive from neglect of duty in keeping watch while riding it at anchor during clam weather, for Dick felt no concern about the turn of the tide if he was pleased with any particular passage in his favourite author HOMER. It might happen when the old man awoke from his slumbers, he would see all the fleet of little coasters under weigh and far ahead, and his son enjoying in a deep reverie, the luxury of class lore, which to him seemed more valuable than either "tide or time" For this obliviousness the old man would unship the tiller, and lay it most cruelly on his son, who, poor fellow, patiently endured all for his love of the classics.

As Richard JONES was one day pensively musing on St George's Pier Head, Liverpool, as was his habit, on a book - many more showing half out of his pockets - the sight of such an object struck Mr ROSCOE'S attention while passing. After surveying Dick, in his loose trousers and old blue jacket, his kindred spirit and love of study kindled his curiosity, who and what such a character might be. Mr ROSCOE was all astonishment as Richard JONE'S answers to his enquiries pertaining to the subject matter of the author he was seemingly pondering over, and as the Pier Head was not quite the place for the well known author of Pope Leo X. to hold a literary converzatione with an uncouth looking sailor, Mr ROSCOE gave him his card with directions to call upon the inmates in the Bank - of which the firm was then, CLARKE and ROSCOE From that time may be dated poor Dick's emancipation from his father the tiller, and the rope's end. He was then a strong Anabaptist as Rabbi BAMBERY, a German Jew told me. He was a regular attendant at the Jewish synagogue, and used to chant from the Telum as loud as any present. Mr BAMBERY had him under his instruction for some time, and considered him a very extraordinary person, but inasmuch as it was impossible to make him understand the duty and necessity to conforming to the common rules of life, the conclusion he came to was that he could never be made available for any useful purpose. I believe Richard JONES, alias Dick Aberdaron was looked upon and pitied by those who knew him as a perfect child of nature, with neither the ability to drive or the sense to be driven - BANGORIENSIS

"On a tower, whose haughty brow

Rob'd in rags from head to toe.

Hark, how each giant rock and desert cave

Sighs to the thund'ring awful voice beneath;

Within the bowels hoarse powder blasts do breathe

Confusion on they workmen wait;

You mock, nor spare each man's estate.

To hurry on the Royal Mail.

Not all your talents Engineers avail.

To save your secret souls from nightly fears,

From Conway's curse, from Cambria's tears.

He spoke and headlong from the tower's height.

Deep in the roaring tide he splash'd, and cried - Good night". Gray

The death is announced in her 77th year of Miss Catherine JONES, the last member remaining of the celebrated Welsh linguist, the late Dick Aberdaron, who though self taught was proficient in 35 languages. Miss JONES resided at the thatched roof cottage in the village of Aberdaron, where the late Dick Aberdaron lived for the greater part of his life, and among other relics left in the cottage is an old clock, which has kept correct time for close upon 200 years and the furniture of Dic's study. An appeal is being made to the Welsh bards and literati for contributions towards buying these relics for presentation to one of the Welsh colleges.