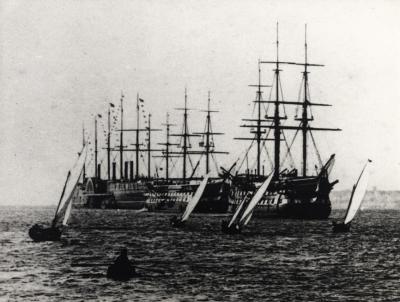 Reformatory ship Akbar and the Conway, on the Mersey

It was announced some weeks ago that the Frigate CONWAY which had been placed by the admiralty at the service of the Liverpool Marine Association for the purpose of a school to prepare boys for the sea service had arrived in the Mersey. A committee of management was then formed presided over by Mr James BEARSLEY and consisting partly of Merchants and partly of members of the association, who proceeded to elect Capt POWELL as commander of the ship and Mr DOBSON B. A. a Wrangler of Cambridge and recently at the High school at Greenwich as Head Master.

The ship has been thoroughly painted, cleaned and re-fitted and now lies at Rock Ferry Slip ready for the reception of boys, and will be open to the public on and after the 16th inst. A book of rules and regulations may be obtained off Mr B. J. THOMSON the secretary of the committee, at their offices, 4 Chapel St.

The boys to be admitted so far as funds permit, the sons of deceased and destitute Masters, Officers and Seamen of the merchant service whose circumstances will not enable them to pay for their education; and boys of any class, intended for sea service whose friends who pay wholly or part of their maintenance and education The general course of tuition will embrace a sound English education and such boys that are capable will be taught trigonometry, navigation, nautical Astronomy etc.

Boys trained in this school will on going to sea, be ready for many duties of a seaman; they will be prevented from going to sea too young, and without education and a home will be provided for children of the deceased and destitute Commanders, Officers and Seamen, whose prospects of success in life will be improved.

The mere mention of an institution of this nature ought to be sufficient to command it to the warm sympathy of a community like this, so that the needful funds for its support may be freely supplied. Liverpool has risen from the ocean like another Venice, and the fishing village of two centuries ago has become a vast emporium, whose exports exceed those of all the rest of the kingdom put together, and surely, for not a little of this marvellous prosperity we are indebted to those who prosecute a profession full of privation and hardship. The sailor subject to casualities arising from climate and the perculiar nature of his avocations is liable to be cut off in mid career, and has not the opportunity afforded to other men of making provision for his family. He leaves the shores of his own Country, not knowing what the issues of his voyage may be, or what will come of those he leaves behind in case he never returns. If this and other institutions in other ports, be properly supported, the anxiety of many an officer and seaman will be much alleviated as he takes leave of his family to proceed to sea.

We are a maritime people our sympathies have always been with the sailor, who has contributed so much to our greatness among nations. Fifty years have elapsed since the naval power of the Great NAPOLEON was effectualy shattered by the genius of NELSON and the gallantry of our Seamen and all fear of an invasion of our island completely dissipated. The intervening period of peace and security may perhaps have led us to think less of those on whose exertions we depend for the safety of our commerce and homes, but now that , “Wars alarms” are again ringing in our ears we once more think of our seamen, we once more think of those lines of CAMPBELL which infused such spirit in our forefathers

No towers along the steep

Her march on mountain wave

Her home is on the deep.

The sea of hereditary domain shall not be wrested from us so long as we can send forth such stalwart men as those which swept the ocean the combined fleet of France and Spain. It is at this juncture that the Frigate CONWAY is presented to the notice of the Liverpool public, and that their sympathy is sought to be enlisted.