I've recently and to my amazement found this snippet

Dreadful suicide. A poor old woman named Sally SALTER, aged 77, hung herself on Thursday fore noon. The deceased resided in a cottage at Clyst St George, Exeter, with her grandchildren and during their absence at school committed the fatal deed. Devonshire Chronicle

Who I feel sure is my relative, has anyone got access to Devonshire Chronicle entry for the suicide and the inquest, or any other newspapers of that time ? 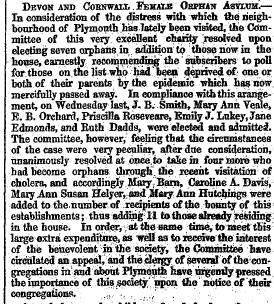 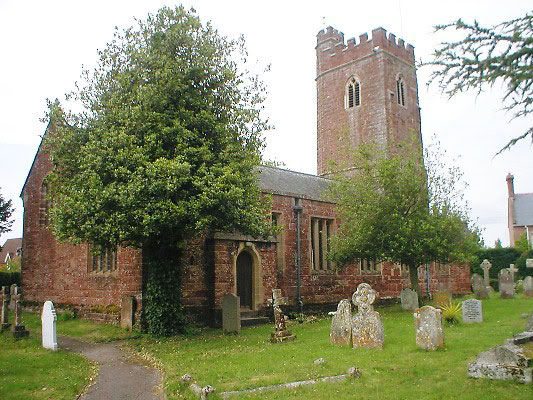 The chancel of the church which has lately been restored by the present rector, the Rev H. T. ELLACOMBE, in the style which prevailed in 1300 [with which date the original three-light east window accorded, and which has been copied in the restoration] has been further improved by the addition of stained-glass, from the establishment of Mr WARD, of Frith St, London, in glass manufactured expressly by Messers POWELL, of White Friars, after long and repeated experiments made by analyses of the glass of the 13th century, by Mr MEDLOCK, late of the Royal College of Chemistry, under the superintendence of Charles WINSTON. Esq, who had been indefatigable in his exertions to restore to its pristine celebrity, such a beautiful art, till lately to a great degree lost, through ignorance of the material anciently used.

Judging from this specimen which is the fifth window yet made of the newly discovered material, the efforts of all these gentlemen appear to have been most successful, as the glass equals in colour and sparkling brilliancy the old specimens remaining in many of our Churches. The tone of the whole is rich and harmonious, evidently arising from the use of materials different from those hitherto employed in modern glass. There is nothing flimsy or watery about it, it has a more substantial appearance, presents a favourable contrast to the raw and flimsy though smudged glass of some modern manufacturers. The blue, in particular is soft and intense, and the white, the green, and pot-metal yellow, are in hue exactly like the old. The design of this very handsome gift to the chancel consists of six groups of figures, dabbed on a running floriated buarry work, with a rich border by the sides, which also adorns the tracery of the head. Each light has two of these medallions or groups. In the centre light is the Nativity of our Lord, with the Crucifixion over it, in the left hand light, a Miracle is represented [Christ healing the sick] and over it the Resurrection, and in the right hand light a Parable [The Sower], with the Ascension over. All the subjects are well treated, and have been designed and painted, by Mr HUGHES in connection with Mr WARD.

We understand the first window that has been executed in this new material was set up in the Temple Church, simultaneously with which, another was done in a church in Staffordshire, in memory of, CLARKE Esq, K.C, that the east window of Buckland Church near Dover, is the third, the fourth [in Sharon Church Yorkshire] was painted by Mr G. HEDGELAND, of London for Colonel MASON, and that before stated, the present is the fifth. We have much pleasure in giving publicity to these successful revivals of ancient art, and this very beautiful gift to one of our churches.

Has for some time past been undergoing a most substantial and thorough restoration, under the superintendence of the rector, with funds handsomely contributed by the landowners and parishioners, and subscriptions raised in the neighbourhood, and from friends at a distance, added to which have been several special gifts, among which the pavement of the restored chancel, in some of Minton's most beautiful tiles, presented by the Mayor of Exeter, John DAW, Esq, who owns an estate in the parish. Four of the windows have been given, and lately another in the north aisle has been filled with stained glass, from the establishment of Mr WARD, of Frith St, London, in glass manufactured expressly from repeated experiments made by analysis of the "old stuff" under the superintendence of Charles WINTON Esq, whose exertions have been so indefatigable in the restoration of this beautiful art to its ancient celebrity.

The window consists of several small panels, containing figures set in an ornamental pattern, the foliaged scrolls of which run over the quarried ground, and are enriched with flowers and other objects in pot-metal glass, by which means the excessive whiteness, which is so common a fault in late ornamental pattern work, has been overcome in the happiest manner.

The style adopted is that of the early part of the 16th century, to which the material is admirably adapted. The work has a brilliant sparkling clearness, with a rich and harmonious tone throughout the whole, and an appearance of solidity, which is more striking as the design itself is thin and delicate, and causes nothing of a dark gloomy hue. It is set up as a memorial to Walter Bridges ELLACOMBE, late of Oriel College, the youngest son of the present rector. All the groups of figures are beautifully executed and well treated, and have been designed and painted, by Mr HUGHES, in connection with Mr WARD. In a lower compartment of the middle light [for there are three] Christ is represented as comforting the afflicted sisters on the death of Lazarus, with the words, "Thy brother shall rise again," immediately above which, on a scroll surrounding the brazen serpent, emblem of the atonement, "and I, if I be lifted up, will draw all men unto me." And in the upper panel is a chorus of angels, under which the words, "He shall give His angels charge concerning thee."

In the other lights the ministry of angels is beautifully set forth in one, by the representation of Jacob's dream [Gen. x.], and scroll with the words "To an innumerable company of angels," and in the other light is the angel appearing to the devout Cornelius, with these words inscribed on an intervening scroll, "And to the spirits of just men made perfect." All are within a rich and appropriate border, and below the whole, where it seems quite out of keeping with the rest, is the name to whose memory it is set up, always a difficulty in the glass, and here a failure.

We would take occasion to mention, that in the chancel which has been rebuilt, there is some interesting ancient glass, carefully rescued from the old east window. One of the subjects represents a former rector, John ALLAR, who died 1407, and is considered a very early instance of a memorial window, he being represented under a figure of St George, to whom the church is dedicated

We understand that the usual services of the church have in no case been suspended during the whole time the work of restoration has been going on, though a new oak roof has been set up, and some of the walls have been taken down to the foundation and rebuilt.

The bench ends are all variously carved and well executed after old designs, the heraldic devices, where they occur, being blazoned in true colours, are a cheerful relief to the sober hue of the natural oak. 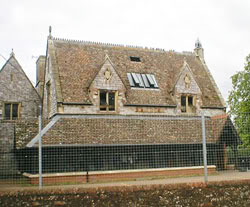 On the opening of the new school-rooms the children were bountifully entertained, on Wednesday the 8th inst all the parents were treated with an early supper at 5pm, of the usual old English fare, being waited upon by the gentry of that place, on which occasion the rector in addressing the parishioners gave an interesting account of the school endowment in 1705, and the various means by which the building was erected, after which the churchwardens, with other farmers, entered the room and addressed the rector, "in the name on behalf of every householder in the parish, and of other inhabitants, we beg your acceptance of a pair of silver candlesticks."

On each is inscribed, "Presented to the Rev H. T. ELLACOMBE, M.A, rector of Clyst St George, Devon, as a memorial to record his works of love in the parish, and the gratitude, respect and esteem of all his parishioners August 1860."

In returning thanks the rector wished it to be understood that as in their address they had alluded to the rebuilding and beautifying of the parish church under his supervision, that the beginning of that good work originated with themselves, when in vestry, assembled a few years ago, they unanimously resolved to make a rate to repair the roofs, which act was followed up by the landowners coming forward in the handsomest manner, and, in proportion to their respective interests in the parish, each contributed to the rebuilding of the fabric of the church, and that these united acts called forth the voluntary subscriptions of many friends in furtherance of the work so happily begun. The church and the schools being finished, the farmers proposed, and all the parishioners united to crown the whole with this well-owned testimonial to the rector and to the members of his family [for to each was also presented some valuable token of respect and goodwill]. Surely this conduct of these 850 parishioners [for the children on their feast day had taken the rector by surprise by giving him a silver pencil case] cannot be too highly spoken of, not too widely spread, and may well be set forth as an example to others to go and do likewise. We also have the pleasure to record that the parents of the children had subscribed for a testimonial to the worthy schoolmaster, Mr R. SKINNER, who, for 28 yrs, had ably conducted the school under very disadvantageous circumstances, as to space and accommodation. They had provided a very handsome inkstand, which the rector was requested to present to him on the memorable occasion, and a book of common prayer to Mrs SKINNER. 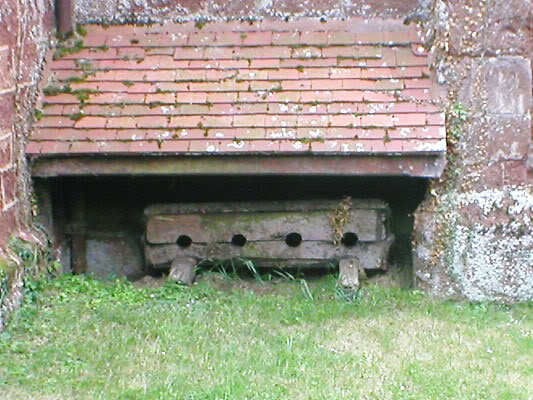 Rectors at the Church of St George

Plaques in the Church of St George

The history and antiquities of the parish of Clyst St George Ellacombe, Henry Thomas, 1790-1885