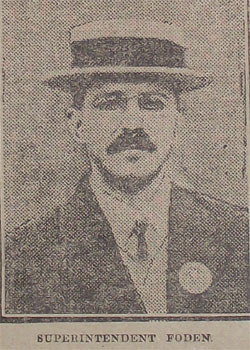 The whole of the Liverpool police force were yesterday greatly shocked at the news of the death of Superintendent FODEN, whose body was found in the forenoon in the police athletic grounds Fairfield, shot through the heart. A rifle lay near. The officer was a crack shot, and often practised with the rifle. It is stated that there was no apparent ground for suicide, Superintendent FODEN having been in good health, highly popular and well respected, with active interest in many phases of police work. He was captain of the Liverpool police team in the tug-of-war at the Olympic Games.

The Liverpool Deputy Coroner, Mr A. G. INGLIS, on Thursday held an inquiry at the City Police Court into the circumstances of the death of Charles FODEN a senior superintendent of the city constabulary, who was on the previous day found in a dying condition at the Police Athletic Ground, suffering from a wound in the left breast. The fatal injury being caused by the discharge of a miniature rifle, with which he was in the habit of practising at the Edge Lane range and was an expert shot.

Detective Inspector MATTHEWS of the Liverpool City Police said, "I have known Superintendent FODEN well, he was a superintendent in the Head Constable's office and lived at 23 Fairfield St and was 39 years of age. At 10.15 am on Wednesday I heard of his death, and went to 23 Fairfield St in the afternoon and there identified his body."

The Deputy Coroner adjourned the inquest for further inquiries to be made.

The Liverpool Deputy Coroner, Mr A. G. INGLIS, resumed the inquiry into the circumstances of the death of Charles FODEN, aged 40, superintendent in the Liverpool police force who resided at 23 Fairfield St, Liverpool, and who was found shot through the heart with a miniature rifle on Wednesday, the 14th inst in the pavilion on the Police Athletic Grounds, Prescot Rd.

Mary Carter FODEN, the widow having given evidence, Alfred CADGE, the groundsman at the Police Athletic Grounds, George HESKETH, a lad who acts as assistant groundsman, Police Constable BREW and Dr BLACKLEDGE were called.

The Head Constable said he could throw no light on the circumstances of the death. FODEN'S principal financial duty was in connection with the Liverpool and Bootle Police Orphanage, and Messers LANGTON and M'CONNELL, chartered accountants had reported that everything was perfectly in order. Speaking in a voice which quivered with emotion he said, "I cannot see anything so far as his strictly official or other duties are concerned, to suggest that he would take his own life, and I cannot believe he did. I cannot throw any light upon it."

The Deputy Coroner said he had been bound, in fairness to the deceased, to ask the Head Constable the position of the deceased in regard to financial matters, because Superintendent FODEN was secretary and treasurer of the Orphanage fund, and, naturally they were glad to hear such statements as that of the Head Constable. The jury and himself would be pleased to find that as far as the deceased's duties were concerned, everything was as it ought to be. Messers LANGTON and M'CONNELL, chartered accountants in Liverpool had gone through the papers, receipts and payments and vouchers carefully and had reported everything in order.

Subsequently at the instant of the jury, CADGE the groundsman placed the gun on the table of the court in the exact same position as it was when last he saw Superintendent FODEN, and himself sat at the table in an attitude corresponding to that of the deceased when he was reading the newspaper, with the muzzle of the gun on the gun close to his left side. The jury returned a verdict that "Death was due to a gunshot wound, but how it was caused there was no evidence to show."

The remains of the late Superintendent FODEN were interred at Anfield Cemetery. Due to the melancholy circumstances and his general popularity there was a great display of public sympathy. The remains were borne on a horse carriage belonging to the Liverpool Fire Brigade. The coffin was covered with wreaths and another open coach followed laden with other floral tributes of regret. 50 men, sergeants and police officers from all the divisions of the city led the procession headed by Head Constable DUNNING, who was in full uniform with cocked hat, sword and spurs. Inspector GIBSON who was mounted rode close to the bier. The police band accompanied the remains from the house top the cemetery. After the service in the church, conducted by Rev E. W. DICKS [St Andrew's Edge Lane] the coffin was carried by six men of the police tug-of-war team to the grave, at the committal the police band played "Lead Kindly light" and the mourners gradually dispersed.