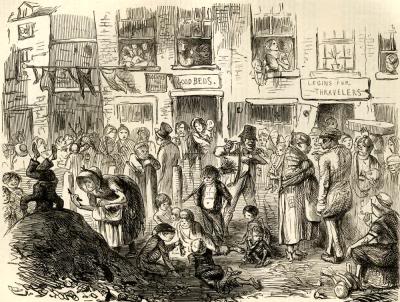 LIVERPOOL JOURNAL
September 29th, 1849
THE HISTORY OF THE CHOLERA

Towards the end of the last century [in 1791], a body of 5,000 troops stationed at Ganjam, a coastal town, , 535 miles N.E, of Madras, were suddenly attacked with a new disease, of such incredible malignancy that men in perfect health dropped down dead in dozens. Exclusively of those then smitten with instantaneous death, more than 500 men sickened in one day and for the most part beyond recovery within an hour. Next day the distemper still raged with unabated fury, and on the 3rd day more than half the army had perished or were in hospital.

In the year 1783 the same strange malady broke out among the pilgrims at Hurdwar and swept off more than 20.000 of the worshippers at that celebrated shrine. At about the same time many of the inhabitants of India, civil as well as military, were siezed with this cruel distemper, which the Moslems called, "mordechim" or bowel death. The term "mordechim" was corrupted by those more conversant with French than Persian into Mort de chien.

The origin of the cholera cannot be distinctly traced to any earlier epoch. The Brahminical, records, indeed, vaguely notice a somewhat similar disease as having prevailed among the Hindoos in remote antiquity, and Bontius a practitioner in Batavia, about two centuries ago, describes under the name of cholera, a bilious distemper that prevailed in the Dutch settlements at Java, passages in the works off Hippocrates, Aretaeus, Josephus, and Zacutus de Lisbonne have been advanced to the proof of the antiquity of cholera.

In 1817 the Moit de Chein burst forth in Bengal with extraordinary malignancy and was found to have changed its character. No longer localised in the tropics it was observed to travel rapidly westwards, its migratory course soon became terribly apparent, within a few weeks it had devastated every town and village within an area of several thousand square miles, from Sylet in the east, to Cuttack in the west, and from the mouth of the Ganges to its confluence with the Jumna.

From this central district the pestilence spread by 3 principal streams one flowing south west, along the Coromandel coast, to Madras, another south east along the opposite coast of the Bay of Bengal to Arracan and the Malay penninsula, a third westwards, along the valley of the Ganges to Blundelaind where the Grand Army, consisted of 10,000, fighting men and 80,000 camp followers, assembled under the MARQUIS of HASTINGS.

The south western stream took 12mths to reach Madras in 6mths more it had crossed to the north coast of Ceylon, which island it rapidly over ran, and to the Mauritius were it appeared in Nov 1819. The south eastern stream travelling more slowly it took 12mths to reach Arracan and 12 mths more to travel down the coast to Malay peninsula. At the British settlement at Penang it destroyed, 3/4's of the population. Thence it made its way through, Sumatra, Java, and the Spice Islands to Timor. Its extreme south eastern limit spread at the same time northwards to the Philipine Islands where it decimated the tribes who rose against the Chinese and Europeans. At Pontianah a Dutch settlement on the western coast of Borneo, it carried off the whole garrison except one man. Still running northwards the next year in 1820, it reached Canton, ravaged Pekin in 1821, and after devastated China for several years, passed the Great Wall in 1827, and spread through many parts of Mongolia.

The western stream travelled about 400 miles in 3 mths, against the periodical monsoon, and infecting some, but sparing others of the towns and villages in its tracks. It reached in early November the British Army encampment on low ground on the banks of the Scinde. It turned camp into hospital, 9.000 men tenth English or Sepoy soldiers, the rest camp followers perished in a week. The Senitel seized at his post, then his successor, a third man and a fourth, would succumb before the 2 hr duty was performed. Many fell down in convulsions on carrying their comrades to hospital.

The neighbouring ravines were filled with the dead.

Within 12 mths, that is, by August 1818, the western stream of the epidemic persued its course along the Ganges, and its tributary the Jumna.

Briefly within 18 mths from its first outbreak, the epidemic had over run the whole Indian Penninsuila, and had proceeded in its course towards Europe.

In July, 1821, it broke out with tremendous violence at Muscat, Bushire and Bussorah, the three principal ports of the Persian Gulf. In Muscat alone 10.000 persons perished.

At Bushire, the houses were abandoned the Bazaars closed, and the streets strewn with unburied corpses. At Bussorah 18,000 persons, nearly a third of the population died in 11 days.

During the winter of the year 1821, its violence to some degree subsided. Next summer however, 1822, it resumed its march towards Europe, extending along the Tigris to Aleppo, and along the Euphrates to Ezeroum in Armenia.

During the next year, 1823, the disease made little further progress. It spread westward from Aleppo. Six years elapsed, During the period the pestilence paused strangely, on the western skirts of Europe. No quarantine was enforced, no obstacle was opposed to the streams of human intercourse flowing westwards from the infected places.

The plague seemed to be exhausted, and the alarm which its proximity had exited soon ceased and was forgotten. In the summer of 1829, it again gave signs of its existence in unabated malignity on the western boundary of Europe. It broke out at Orentburg, a town on the Tartar frontier.

Next year in 1830, during the heats of July, the smouldering pestilence broke out again in Persia. From Saratoff it continued rapidly to ascend the Volga towards, Moscow, where next month, September 14th, 1830, two or three cases were reported.

The Emperor of Russia now became alarmed. He threw a, cordon sanitaire, around Moscow, and established a strict quarantine around its gates, and enjoined a careful isolation of the sick. In spite of theses measures, the disease spread rapidly attacking chiefly the squalid inhabitants. Here in 6 wks above 3,000 persons perished.

While the Cholera was thus ascending the Volga to Moscow, and then to St Petersburgh and the shores of the Baltic, it also spread down the river Don to the borders of the Black Sea, reaching Odessa and the mouth of the Danube soon after its outbreak in Moscow. The pestilence now made its way across the continent by several parallel streams. Along the valley of the Danube it spread to Vienna, which it reached in August 1831. Along the shores of the Baltic it crept from Petersburgh by way of the Riga and Stettin, to Berlin, where also it appeared in 1831. An intermediate stream reached Warsaw and Cracow in the Same year and ravaged many towns of Poland.

From theses principal streams the infection was diffused along the roads and rivers throughout, Austria, Hungary and Germany, till, among other places it reached, Hamburg in the autumn of 1831.

Reverting for the moment to the East we find Egypt attacked in the same year, 1831. At Mecca, 20.000 pilgrims perished in 4 days, and at Cairo the mortality was so terrible that even the Physicians perished, and the hospitals were filled with shrieking wretches dying without aid. Constantinople had already, two months earlier, been entered by a pestilential stream.

It was early in October, 1831, that Hamburgh was attacked. On the 26th, of the same month the disease broke out in Sunderland. At that time strangely enough, France was still unaffected, as also was the Spanish and Italian peninsulas.

Almost simultaneously with its appearance in Sunderland the disease broke out in London. Four months later in February 1832, Edinburgh was attacked, and a few weeks later the disease appeared in Dublin. It spread gradually throughout Great Britian and Ireland, and destroyed about 30,000 persons. Calais and Paris were infected nearly simultaneously in March, 1832, not, therefore as might have been expected, by propagation of the disease from Germany along the Rhine, but obviously by a reverted stream from England. Three months later, June 1832, the pestilence appeared at Quebec. In the same month it broke out in New York, and spreading rapidly, ravaged nearly the whole American Continent.

While the western stream of the virus was thus rapidly completing the circuit of the globe, a reflex current, travelling more slowly from England in a south easterly direction, attacked, Lisbon and Madrid, in 1833, spread during 1834, throughout the peninsula, infecting the British garrison in Gibraltar, penetrated in 1835, to Piedmont, Genoa, and Florence [which the Alps it would seem had previously protected], reached Naples in 1836, and Rome in 1837. At Naples a rigorous quarantine proved utterly ineffectual.

From the outline it would seem that the Cholera of 1817, in its course to England, had three periods of active progress, separated by two pauses. Two years it took to over run India, two to pass through Persia to the Caspian Sea, and two to pass through Central Europe and Great Britian. During two years it paused in its career on the western boundary of Hindostan, during six it smouldered on the Eastern verge of Europe.

The two south peninsulas of Europe, isolated in a great measure by the Alps and Pyranees, enjoyed a further special respite, nor was it till, twenty years after its outbreak in Bengal that this terrible plague had fetched the compass of the habitable globe.

In its westward progress the disease was observed to have added to its former terrors, a new and more destructive feature, the consecutive fever, of which thousands perished after surviving the stage of collapse

. After lingering in each country attacked, for two to three years after the date of its arrival, the cholera subsided in Europe,. In India however it became endemic, raging yearly for a period of several months. Everywhere the squalid abodes, of the poor, and their miserable inmates had been the chief seats and subjects of the disease. Yet the filth of London was left to ferment in its 300,000 cesspools. And that is also true of, Moscow and Petersburgh of Berlin, Vienna and Paris, of Lisbon and Madrid, and of Rome. Everywhere apathy and indolence followed on the subsidence of panic.

Of that apathy and that indolence Europe is at this moment suffering the consequences. The pestilence now raging has pursued, but with little deviation, the track of its predecessor, travelling, however, more rapidly and committing fiercer ravages than before.

Many cities "as, for instance, Petersburgh and Berlin" were attacked at the same season, and even the same month, in 1847 as in 1830. The same streets "nay, the very same houses" that suffered severely before, are suffering most severely now, and towns which, escaped like Birmingham in 1830 are again enjoying a similar immunity.