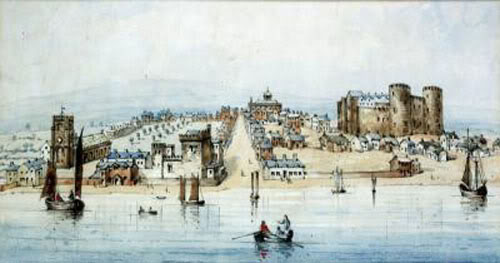 Back to old Liverpool

A visit to the Museum.

The model of Liverpool as it was nearly 250 yrs ago.

Would you like to have the power to stand in the heart of Liverpool and be transported back through the centuries to when Charles 11, was king, and ancient Liverpool to appear before you with its, Castle, its fields, its moors and its great pool spilling up that which is now the busiest part of the town?

Let us go to the room in the Museum devoted to Liverpool and its history. One of the principal exhibits is a large model of the town as it was in 1670. Inset, are two lucidly marked maps,one a facsimile of the model the other a plan of the present day structure of the town.

By comparing the two, it is a simple matter to see exactly the changes over the intervening years.

The period is well chosen, for it was about 1670 that modern Liverpool began, that trade, population, and progress took such a decided turn, at that period that it may be regarded as a boundary between the old, quiet, coasting port, and the progressive town which culminates in our present day.

The most obvious feature of the model is the Mersey Pool, which extends from the river inland farther than the site of the museum in which we stand. If we stood in William Brown St, we would find ourselves on a primitive road called Shaws Brow, on the bank of the tidal stream, heath land on either side, and a bridge leading across the water.

The bridge was the, Stone, Townsend Bridge, and was erected chiefly for the convenience of, first, pack-horses, and later coaches, as it connected Dale St with London Rd, which was a broad path over the heath, and was the principal road out of Liverpool.

Canning Place, Mersey St, Paradise St, Whitechapel, and the Old Haymarket were non-existent. Nothing but the Broad Pool flowed over the site of these streets.

Three bridges spanned it, the Stone Bridge, Lord St Bridge and near the mouth, Pool Bridge.

As a child I can remember being told, that this water gave the town its name, inasmuch as it was the pool at which birds called Livers came to drink. I have reason to believe many children share that idea, which contains more imagination than the truth, as there is no evidence of such bird ever existing.

In fact, the origin of Liverpool's name has often been a matter of conjecture, but no conclusion has been made. Although the fabulous Liver figures on the coat-of-arms it is well to remember that the original symbolic bird of Liverpool was the Eagle of St John.

But to return to the model! We see that, it was distinctly split by the water, the one side being nothing but a vast blank, boasting a few rude paths and hardly a dwelling.

There was the road leading to Toxteth Park [now Park Lane], the road over the common [Hanover St and Ranlagh St] and the Fall Well-Lane [Hood St]. All these were just broad paths over the heath, quite devoid of habitations or buildings of any kind.

The other side of the pool was the real Liverpool. There were three principal roads inland. They were Chapel St, Water St and the road to the castle [now James St]. If you walk up James St you are walking up the path to the Castle, which stands on the site of the Queen's Monument in St George's Cresent.

It is just a few years after the siege of Liverpool when the castle stood its own for 26 days, covering the harbour with its cannons, much to the surprise of the Royalist Prince Rupert, who expected an easy conquest of the sleepy little market town.

There is an underground passage connecting it with the river, along which provisions for the garrison were conveyed. A ditch some 20 yds wide surrounds the castle, which is built upon a square plateau of rock, and is a formidable structure, crowned with towers and guarded by strong lofty walls.

Castle St, was then in existence, but South Castle St was called Pool Lane as it extended to the water.

The principal cuts through in the town were Oldhall St, so called from the old hall of the MOORE family, tenanted at the year of the model by the Mayor. It was along this street that the victorious Royalists made their entry to the town. A continuation was, Jogger St, [High St]

Lord St is marked by a path of trees, and was really part of the castle orchard. It was dotted with cottages occupied by retainers of the family of the castle.

Dale St ran from High Cross, which stood where the Exchange now is, to the Stone Bridge. Being a continuation of Water St, it was the chief cut through the town, forming a continuous line to the river, to the bridge, which we have seen, led to London Rd. Its name probably from the Saxon, "Dele" meaning valley, originally it was Dele St.

On the site of the present Tower-buildings at the bottom of Water St, was the Tower of Liverpool, it originated in the 12C, but was then only a dwelling. In the 14C it was really built by Sir John STANLEY. Later it served for the accommodation of the Earls of Derby, when visiting the borough. During the siege it was the headquarters of the Parliamentarians, it existed till 1826, and remains were found even later.

Near the Tower is St Nicholas Church, the oldest in the town. It has been rebuilt and the 2nd spire "that shown in the model" fell last century. This has been in evidence throughout the early history of the borough, and was used for warlike purposes during the siege.

The Town Hall, shown on the model was replaced by a finer model a few years later in 1673, since then it has been twice built, once on account of fire, and during the riots of 1775, when it was besieged and almost destroyed by the mob, who bombarded it with cannons.

I may mention during the excavations of the foundations of the, "Mercury" there was found a piece of an oak tree which probably once flourished upon the bank of the Mersey Pool.